A Hall of Fame!
TV Week has announced that the Melbourne Concert Hall at the Victorian Arts Centre will be host of the 37th annual TV Week Logie Awards, to be held in April and televised on the Seven Network. The Concert Hall, opened in 1982, reflects the colours and patterns of the environment of the Australian continent. Much of the material used in the construction is of Victorian or Australian origin. The Victorian Arts Centre comprises three main buildings — the theatres, topped by the famous 115 metre spire that has become a Melbourne landmark, the Melbourne Concert Hall and the National Gallery Of Victoria.

Kym gets down to business
Actress Kym Wilson is about to return to TV with a 13-week stint in Heartbreak High, but in the meantime has set up a production company with fiancé Jeremy Sims. Pork Chop Productions will be launching its first production at Melbourne’s Malthouse Theatre. “The idea is Jeremy will direct and I’ll be producing,” she told TV Week. As well as appearing in Heartbreak High, Wilson will also be appearing on stage in the Ensemble Theatre’s production of David Williamson‘s Emerald City, starring with Noeline Brown, Peter Kowitz, Andrew McFarlane, Lenore Smith and Peter Turnbull. “It is really only now that I’m starting to play adult roles and do more theatre, and see the diversity of characters I want to play,” she said. 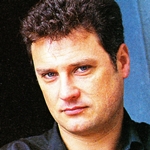 Simon remains faithful to Janus
Actor Simon Westaway (pictured) is known as the tough Detective Senior-Sergeant Peter Faithful on ABC‘s Janus, but there is a great diversity to his acting roles. On stage, he has played both Brad and transsexual Frank’n’Furter in The Rocky Horror Show, Elwood Jones in The Official Tribute To The Blues Brothers, and an Italian aristocrat in the NIDA production of Villain Of Flowers. He has also recently been to New York to study musicals bound for Australia. “From an actor’s point of view, I wanted to know if I could make a contribution and be involved in these shows,” he told TV Week. “I wanted to observe these productions so that when I’m in an audition, I’ll know what is required of the character. Australia has a very high standard of musical production, and I’d like to be involved in that.” Despite disappointing ratings for the first series of Janus, Westaway hopes numbers will pick up for the second and final series. “People fall into the trap of watching television to pass time. If you do that, as opposed to watching it at least sometimes to educate and enrich yourself, then I think you’re selling yourself short.”

“The Seven Network has high hopes in 1995 for its new drama series, Fire. Having had a quick look at the pilot, I think these hopes seem to be well-founded. Pilots — the episodes where money is sprinkled about liberally in an effort to create a good first impression — can be misleading, but with Fire it’s a case of so far, so good. The Seven Network does seem to have a happy knack of making its dramas work — a knack that must be the source of some envy among its commercial counterparts.”

Monday: The Ford Australian Open (11am to 5.30pm, 8.30pm to 12.30am, Seven) kicks off two weeks of coverage from the National Tennis Centre, Melbourne. In the series return of Home And Away (7pm, Seven), the Ross household is shocked when Sally (Kate Ritchie) runs away.

Tuesday: The Benson And Hedges World Series Cricket: Second Final (2.20pm, Nine) has limited live coverage from the Melbourne Cricket Ground. In Neighbours (6.30pm, Ten), Annalise (Kimberley Davies) is disappointed when she doesn’t get the part in the local play. Jennifer Keyte’s World Around Us (7.30pm, Seven) presents an insight into the woman destined to be Australia’s first saint, Mary MacKillop.

Wednesday: The inaugural Origin Of The Ashes match (10am to 12pm, 12.30pm to 5pm, ABC) marks the return of cricket coverage to ABC — featuring the Australian XI versus England.

Thursday: The Benson And Hedges World Series Cricket: Third Final (2.20pm, Nine) has limited live coverage from the Melbourne Cricket Ground. In Home And Away (7pm, Seven), Roxy (Lisa Lackey) suppresses her desire to travel for the sake of her relationship with Rob (Matthew Lilley).