Channel 31, as it was then, was launched by the Melbourne Community Television Consortium (MCTC) on Thursday, 6 October 1994. Formed in 1991, the MCTC was a group of eight existing community television groups, some of which had already conducted low-powered test transmissions of their own. These groups were to cover either their local geographic areas or specific demographic groups, such as the Asian, student or gay and lesbian communities.

In March 1993 the consortium was allowed a Melbourne-wide temporary broadcasting licence similar to those in other capital cities.

Although MCTC had launched on 6 October the station had commenced test transmissions on 23 August from a transmitter installed on the ABC-SBS tower at Mount Dandenong. The purchase of the transmitter had been made with the assistance of sponsor Harness Racing Victoria and test transmissions soon extended to live coverage of the Saturday night harness racing ahead of the station’s October launch.

The launch on 6 October saw the station extend programming to five nights a week — regular programming Monday to Thursday and the racing on Saturdays — with programming scheduled for around 4 to 5 hours a night. Of the participating members of the MCTC, student-based RMITV provided the majority of programming for the new station as it was the only consortium member to have a full working studio. This also allowed the broadcast of live-to-air productions.

Eastern suburbs group ERA contributed a weekly drama series Best Years Of Our Lives and comedies The Ninth Day and Just A Bum.

Programming eventually expanded to seven nights a week and from March 2001 extended to daytime with the launch of a daily eight-hour programming block — comprising both new and vintage programming aimed at the over-55 age group. 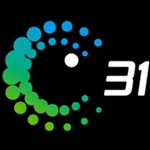 C31 has given exposure and experience to talent, both in front and behind the cameras, that have gone on to careers in mainstream media. Rove McManus has been the station’s most celebrated graduate but others have included Hamish and Andy, Corinne Grant, Dave Thornton, Tommy Little, Nazeem Hussain, Gorgi Coghlan and Waleed Aly. The station has also led initiatives such as the Antenna Awards, celebrating and recognising the contribution made by community TV programs and producers nationally.

The Marngrook Footy Show was later picked up by ABC2 and is now on SBS channel NITV. Movie-themed comedy show The Bazura Project was also picked up by ABC2. Gardening show Vasili’s Garden produced a series for SBS, while Blokesworld was picked up by Network Ten.

The station was allocated a permanent broadcasting licence in 2004 but like other community broadcasters had not been allowed to broadcast in digital, while commercial and national broadcasters were given free access to digital spectrum to allow simulcast with their analogue broadcasts.

After a lengthy campaign by the community TV sector, the then Labor Government finally gave the sector access to digital broadcasting in 2009, but only on a five-year basis, utilising unused broadcasting spectrum. This temporary access to digital broadcasting has been extended by Communications Minister Malcolm Turnbull, but only until the end of 2015. The Minister feels that despite C31 alone producing 90 unique programs each week, community TV has nothing to contribute to media diversity, education, talent or employment, and has decided on everyone’s behalf that it is best for all concerned that community TV relinquish the “television” model and embrace an audience-restrictive online-only presence — something that will affect the sector’s ability to attract viewers and maintain sponsors to make them sustainable. The Minister’s decision will allow the broadcasting bandwidth currently being used by community TV to be re-allocated to other uses which may include use by the commercial sector, who currently see fit to supplement their main channels with multiple shopping channels that provide little or no media diversity, education, talent or employment.

Given that the broadcast television industry had taken over a decade to migrate from analogue to digital, with mainstream broadcasters gaining considerable financial and infrastructure assistance from the government during that time, it is not clear how community TV and its audience — in C31’s case an estimated one million viewers each month — are to be supported in making the move online in the space of little over a year.

Both the sector and the wider community are fighting the government plan to have community TV shunted off the airwaves. The ‘Commit To Community TV’ campaign is at http://i.committocommunitytv.org.au/

C31 will be celebrating its 20th birthday with a two-part special, 20 Years Of C31, beginning Monday 6 October at 7.30pm and hosted by Stephen Hall (Under Melbourne Tonight), Emma Race (The Breakfast Show), Caitlin Jolly (Destination 90s), Anthony McCormack (Naughty Rude Show, 31 Questions) and Isabelle Hayler (1700). This will be followed by documentary Behind The Antennas at 8.30pm and a repeat of last week’s Antenna Awards at 9.00pm.

The second instalment of 20 Years Of C31 airs Monday 13 October.

Permanent link to this article: https://televisionau.com/2014/10/melbournes-c31-turns-20.html