Jimeoin swings back!
As his comedy show Jimeoin returns for a second series, the Irish comedian has just returned from a working holiday in the United Kingdom. He admits he is “having discussions” with the production company behind the acclaimed UK sitcom Drop The Dead Donkey about the prospect of a series of shows. “The idea being talked about is appealing to me because it would involve producing six half-hour shows,” he told TV Week. “The attitude to television production is a lot different in the UK than it is here. Over there, performers are not forced to burn their ideas to death. Here, a network sees a good idea and performers are forced to keep doing it until everyone is sick of it.” 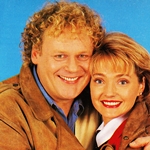 Mark and Tiffany switch over to TVTV
Mark Mitchell and former Paradise Beach star Tiffany Lamb (pictured) will host the new-look TVTV when it returns to screens in August. The show is moving production from Sydney to Melbourne, and the two new hosts hope to be able to boost the show’s single-figure ratings. “I’m not there to lambaste or debunk,” Mitchell said. “I’m not setting myself up as a critic. I’m there to please the audience and not end up on Media Watch.” Mitchell will also present a new segment featuring material from Australia’s television archives. “It’ll be a tribute to TV that will keep going for the next two years until TV’s 40th birthday in September, 1996,” he said.

Meet the new (born) Neighbours
There’s a baby boom happening in Ramsay Street, with Neighbours characters Cheryl (Caroline Gillmer) and Gaby (Rachel Blakely) both set to give birth on the same day. Gaby gives birth to Zac, while Cheryl has an emergency caesarean to give birth to Louise 10 weeks early after complications that threatened both their lives. Having babies on the set is a challenge. “We’re only allowed to have the baby on set with the lights up for 30 seconds at a time. Then the lights automatically go down,” Blakely told TV Week. “So everything has to be done in chops and changes. It’s hard to pick up emotionally where you left off. But the baby, Jay, has been a dream to work with, so far!” 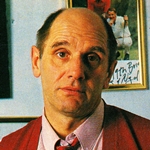 Bruno produces the goods
Actor Bruno Lawrence (pictured) says playing the part of producer Brian Thompson in ABC series Frontline is one of the best roles he has ever played and he has incredible praise for the team behind the show. “They have incredible knowledge and understanding about television, and how it affects the public,” he told TV Week. Lawrence is passionate about making quality television and as a young actor-producer in New Zealand often found their local industry a challenge. “I hated New Zealand television. It was the enemy. It was full of these failed Poms with bureaucratic attitudes. I’d suggest programs and they’d talk bull**** to me.”

“TVTV will return on 1 August with Mark Mitchell and Tiffany Lamb as the new hosts. With all due respects to the previous incumbents, they certainly bring with them a higher profile. The reborn TVTV will be almost a total overhaul and some aspects of the new-look show have been invented out of necessity. The set, for instance, will be the show’s production office… its real production office. Otherwise, studio space availability would have meant it being recorded earlier in the day than desirable. TVTV has one of the toughest timeslots on the schedule, head-to-head against a soap on Network Ten and two shows — Real Life (Seven) and A Current Affair (Nine) — which, in the fierce battle that continues between them, can spend on promotion in a week more than TVTV would spend on production in a year. For television buffs, however, TVTV is more interesting than them all and I happen to think that its survival is important, whether it is produced out of Sydney, Melbourne or Albury-Wodonga.”

Monday: In Neighbours (6.30pm, Ten), Danni’s (Eliza Szonert) stardom is halted by financial troubles. In Talk To The Animals (7.30pm, Seven), Jane Holmes previews the latest animated feature at the Disney Studios in Los Angeles, Dr Harry Cooper assists a vet at an operation on a dog, and Richard Fitzgerald learns about the life cycle of the hummingbird. In Frontline (8pm, ABC), the quest for ratings overrides the quest for the full story… with devastating results.

Tuesday: In Neighbours (6.30pm, Ten), Cheryl’s (Caroline Gillmer) health is improving, but her baby is still in a critical condition. Frank Wilson and Noel Trevarthen guest star in GP (8.30pm, ABC). In Law Of The Land (9.30pm, Nine), Hamilton (Wyn Roberts) is bullied by angry locals who want the recycling plant to go ahead.

Wednesday: Luke (John Adam) farewells Summer Bay in Home And Away (7pm, Seven). In Heartbreak High (7.30pm, Ten), Rose (Katherine Halliday) shocks her peers and teachers when she announces that she is pregnant, but the most affected by her news is her father. 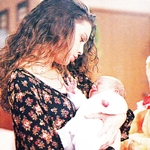 Thursday: In Neighbours (6.30pm, Ten), Gaby (Rachel Blakely, pictured) is determined to prove new mothers can be capable business women. Beyond 2000 (7.30pm, Ten) unravels the mysteries of Alzheimer’s with a new approach to an age old disease, and looks at the new generation of sports shoe from Japan that makes present day shoes look prehistoric.