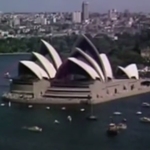 This weekend marks the 40th anniversary of the official opening of the Sydney Opera House — one of Australia’s most famous landmarks.

The construction of the Opera House was mired in controversy and budget blowouts. Danish architect Jørn Utzon, whose design was selected back in 1957, had resigned from the project well before its completion.  It would be decades before Utzon, who passed away in 2008, would be reconciled with the building he designed. The Opera House was completed ten years overdue at more than fourteen times its original budget.

The official opening of the Opera House, on a sunny though windy afternoon on Saturday, 20 October 1973, was a momentous occasion with thousands gathered both at the building and in boats scattered throughout Sydney Harbour. Queen Elizabeth II declared the Opera House open before being taken on a tour of the site.

The event was significant for television, with an estimated 300 million viewers worldwide and, ironically, many countries would see the opening on colour TV although Australian television was still in black-and-white.  The opening program served as one of the first colour broadcasts on New Zealand television. 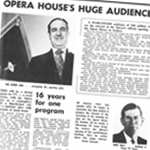 The ABC was the host broadcaster of the official opening, with its coverage simulcast through many commercial stations. It was one of the national broadcaster’s most ambitious projects to date — with a production staff of over 50 and up to 12 cameras around the Opera House to capture the spectacle for the vast global audience.

Footage from the official opening telecast has been uploaded to YouTube by ABC.

On the evening of 20 October current affairs program Four Corners was presented live from the Opera House — followed by the Royal Opening Concert featuring the Sydney Symphony Orchestra and Sydney Philharmonia Choir.

The 0-10 Network also presented a 90-minute special broadcast on the night of the official opening — Mike Walsh At The Sydney Opera House.

To commemorate the 40th anniversary of the Sydney Opera House opening, ABC will broadcast the documentary Autopsy On A Dream — the controversial BBC documentary on the project produced back in 1968.  At the time the ABC had tried to stop the documentary being made and after it had aired on the BBC any copy of the program was thought to have been destroyed.

More than 40 years later a mute print of the film was discovered by researchers for The Opera House Project. With the aid of transcripts and sound the documentary has been restored, including Bob Ellis recreating his original commentary.

The 90-minute special will be accompanied by the prologue The Dream Of Perfection, to mark the 40th anniversary of the Opera House, featuring interviews with Sir David Attenborough, Jan and Lin Utzon, the sons of Jørn Utzon and architect Richard le Plaistrier.

Permanent link to this article: https://televisionau.com/2013/10/sydney-opera-house-celebrates-40-years.html