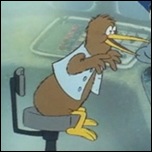 While New Zealand television is not normally covered on this blog, we would like to extend congratulations across the Tasman on the occasion of 50 years of television in New Zealand.

New Zealand’s first TV station, AKTV2 Auckland, signed on at 7.30pm on 1 June 1960.  Transmission was initially limited to two nights a week but was extended to four nights the following month.

Although New Zealand television was funded by viewers’ licence fees, a limited amount of advertising was allowed to boost funds – but advertising was limited to only a couple of days a week.

All four channels, though owned by the national broadcaster NZBC, were basically operating in isolation of each other.  It was in 1969 that all four channels were first linked up via a temporary microwave link to allow simultaneous transmission of the moon landing – although viewers were still seeing images after the event, as New Zealand was yet to establish satellite-receiving facilities and had to rely on film sent over from Australia.

A satellite link was established in 1971, and in 1972 New Zealanders watched the Melbourne Cup live via satellite.  Nationally networked programming was launched in 1973.

Colour television began in New Zealand in November 1973 – over a year ahead of Australia – but it was not without its challenges.  Colour coverage of the 1974 Commonwealth Games from Christchurch was limited only to swimming, track and field and boxing events as the network did not have enough facilities to allow colour broadcast of all events.

A restructure of the nation’s public broadcasting interests was implemented in 1975 – with NZBC split up into separate radio and television divisions, and the splitting up of the single television network into two competing networks – TV One and TV2 – giving New Zealanders a choice of TV channels for the first time.

By 1980, the two networks are brought back under the one organisation, TVNZ, but maintaining the two-channel structure. 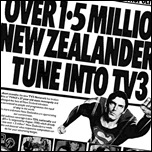 The end of the 1980s marked the arrival of New Zealand’s first privately-owned commercial television network, TV3.  The new network, bringing an end to almost thirty years of the state-owned monopoly, collapsed into receivership shortly after going to air – not able to compete with the Auckland Commonwealth Games and a stockpile of first-run programming being thrown against it by the two-channel TVNZ giant.  TV3 is later bought out by the Canadian CanWest organisation, a company that also bought a share of Australia’s Network Ten as it too was recovering from financial decline.

CanWest also supplemented TV3 with a second network, TV4, in 1997.  The new network, providing youth-focused programming, is later reworked into a music and entertainment channel, C4.

Pay television entered the New Zealand market in the 1990s with Sky Television, and a new free-to-air commercial network, Prime Television, is formed as a joint venture between Australia’s Nine Network and regional network Prime.  Prime in New Zealand is now owned by Sky. 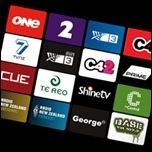 Digital television commenced transmission in New Zealand in 2007 with the broadcasters providing a joint initiative, Freeview.  All free-to-air networks are carried on Freeview, with the addition of extra channels such as TVNZ6 (family and NZ-based programming) and TVNZ7 (news) and niche-format channels covering various genres including indigenous, multicultural, religious, public affairs and community programming.

To commemorate 50 years of New Zealand television, and to coincide with a special to go to air on 1 June, TVNZ has produced a special website, Cheers To 50 Years, including archival footage, trivia and tributes to half a century of television.

Permanent link to this article: https://televisionau.com/2010/05/50-years-of-nz-tv.html