William’s new accent on drama
Actor William McInnes is getting used to mastering foreign accents for his film and TV roles.  His recent role as upper-class Englishman John Macarthur in the sitcom Bligh has been followed by the role of German immigrant Max Heimer in Nine‘s 1950s drama Snowy. He told TV Week all he needed to pick up the German accent was watch some old war movies. “The sound guys on the Snowy set helped me out by telling me if the accent slipped,” he said. 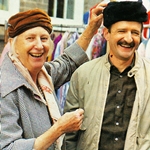 Grin and Beare it!
Garry McDonald and Ruth Cracknell are now working on the sixth series of Mother And Son. Filming on location in the Sydney suburb of Five Dock, one scene has had Maggie Beare (Cracknell) riding in the pillion seat of a motorbike. “I’ve become addicted… I want to buy one now,” Cracknell said with a grin. McDonald responded, “Ruth — the bikie’s moll!”. So after ten years and once series six has completed production, will there be a seventh series? “Geoffrey (Atherden, the series’ writer) has been saying he won’t do any more, but we will see,” producer John O’Grady told TV Week. “We’ll pressure him. Ruth and Garry will too.” 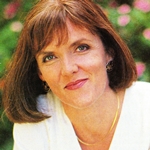 Court in the act
The court system is about to be exposed to the Australian public in an upcoming documentary, So Help Me God, from Jenny Brockie (pictured). The special, to screen on ABC, follows the various aspects of the judicial system filmed over a six week period. More than 120 people gave their written consent to be filmed for the production. “I wanted this to be very human.  It’s a very personal look at the process,” she said. “People’s image of what a court is — which is Rumpole or LA Law — is so far removed from reality. This film is a very different picture of a court than perhaps those usual courtroom dramas. There’s nothing glamorous about it all, no jury sitting there deliberating or pondering, and there are no flamboyant speeches.”

First Edition’s second chance
ABC‘s early morning news program First Edition has returned to the schedule in a new format and with a new host, former foreign correspondent Tony Eastley. The revised program promises to be a slicker, hard-edged half-hour of news. “Before it was an hour long and there were a number of talking heads,” Eastley told TV Week. “I’d say if you combined the 7.45am ABC radio news with AM that’s what we’ll be delivering. We’ll have studio guests, live satellite interviews and live telephone interviews, and a business section. Nearly everything is live.” Eastley and his family are relocating from Sydney to Melbourne where the show is based.

“… Another American comedy more than worth watching has appeared virtually unannounced — Seinfeld on the Nine Network (10.30pm Thursday). Starring Jerry Seinfeld, it blends sitcom with stand-up and features some of the best comedy timing you’re likely to see. The late timeslot is a bit of a mystery.”

Program Highlights (Melbourne, September 25-October 1):
Saturday: The AFL Grand Final dominates Seven’s schedule, with the overnight Football Marathon running through to 8am, followed by the Grand Final Breakfast (8am), the Under 18 Grand Final (9am), the VSFL Grand Final (10.55) and then the 1993 AFL Grand Final (2pm) from the Melbourne Cricket Ground. 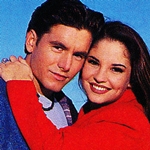 Tuesday: Miss Universe Australia Voni Delfos makes a cameo appearance, as herself, in Paradise Beach (5pm, Nine). In A Country Practice (7.30pm, Seven), Hugo (Gavin Harrison, pictured) realises he’s falling in love with Christina (Rebekah Elmaloglou, pictured), but he is puzzled by her mysterious background and he is shocked to discover her secret — she is suffering from leukaemia.

Wednesday: In Newlyweds (8pm, Seven), Marnie (Sandie Lillingston) gets a shock when she learns that the radical theatre group she has joined requires its cast to perform in the nude. The documentary So Help Me God (8.30pm, ABC) follows a group of defendants as they weave their way through the justice system.  Meanwhile, The Republic — Court In The Act (8.30pm, SBS) presents a courtroom scenario with barristers, a judge, expert witnesses and a jury of everyday Australians setting out to inform viewers about the republic debate.

Thursday: In Snowy (8.30pm, Nine), a developing friendship between Wolfie (Jochen Horst) and Kate (Lucy Bell) makes everyone uneasy. In Secrets (8.30pm, ABC), the rookie spies are learning how difficult it can be maintaining a private life after joining the FIRM.