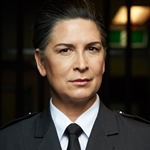 Production of the second series of Foxtel‘s Wentworth commences in Melbourne today (Monday) with respected actress Pamela Rabe (pictured) joining the cast to reprise the legendary character of Joan ‘The Freak’ Ferguson.

Rabe, currently appearing in The Cherry Orchard for the Melbourne Theatre Company, has a list of TV credits including The Leaving Of Liverpool, A Country Practice, Seven Deadly Sins, Mercury, The Secret Life Of Us and CrashBurn.

Officer Ferguson, whose presence instilled fear into the inmates and disdain from her colleagues, was played in the original Prisoner by Maggie Kirkpatrick from 1983 through to the series’ conclusion in 1986.  The final downfall of the once-confident Ferguson gave Prisoner one of the strongest send offs of any Australian series.

In Wentworth the character will be the new prison governor who comes into Wentworth as Franky Doyle (Nicole da Silva) has assumed ‘top dog’ status with Bea Smith (Danielle Cormack) languishing in solitary (‘the slot’).

In a statement issued by Foxtel, Rabe said she is looking forward to the new role:

“I am honoured and excited to join the Wentworth team. I have great memories of the original Prisoner series and Maggie Kirkpatrick is a dear friend so it is an absolute thrill to fill her formidable shoes and gloves in this reincarnation of the role of Joan Ferguson.”

FremantleMedia Australia Director of Drama Jo Porter promises that the second series of Wentworth will continue to shock:

“Wentworth season two will continue to take no prisoners when it comes to shocking storylines and surprising character twists and departures. Resuming some months after the bloody conclusion to season one, the position of Governor has once again been challenged. It’s time for Joan Ferguson to enter the fray and Pamela is a remarkable addition to the amazing cast for Wentworth’s second season.”

As well as Cormack and da Silva, returning to the cast for the second series are Kate Atkinson as Vera Bennett, Celia Ireland as Liz Birdsworth, Shareena Clanton as Doreen Anderson, Aaron Jeffery as Matthew ‘Fletch’ Fletcher, Robbie Magasiva as Will Jackson and Katrina Milosevic as Sue ‘Boomer’ Jenkins.

Although Wentworth has divided fans of the original Prisoner with its re-writing of the original characters into new personas it has been a hit for Foxtel and has been well received in the United Kingdom where Prisoner still has a strong fan base.

The second series of Wentworth will run for 12 episodes and is set to appear on the Soho channel in 2014.

Permanent link to this article: https://televisionau.com/2013/09/wentworth-reprises-the-freak.html