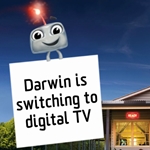 Analogue television has been in operation in Darwin since 1971 — making it the last capital city in Australia to receive television. The first local station was ABD6 (ABC) launched in August 1971.

Commercial station NTD8 (now Nine Darwin) was opened in November 1971. Both ABD6 and NTD8 were taken off air by Cyclone Tracy which destroyed much of the city on Christmas Day, 1974.  ABD6, being the national broadcaster, was back on air after a matter of days — but NTD8 was off-air until October 1975.

According to the most recent Digital Tracker survey — covering the period January to March 2013 — it is estimated that approximately 93 per cent of Darwin households have converted at least their main TV set to digital. Darwin has had one of the fastest conversions to digital TV in Australia largely due to the third commercial channel, Darwin Digital Television, being launched exclusively in digital in 2008.

Unlike other capital cities Darwin’s main transmitter site will not be subject to a retune as all existing digital transmissions are already on their post-retune frequencies.

Permanent link to this article: https://televisionau.com/2013/07/switching-off-analogue-in-darwin.html