Simon heads for Wandin Valley
E Street star Simon Denny had been considering if it was time to move on from the series after one year as Constable Sam Farrell — only to have the decision made for him when the series was axed. The Tasmanian-born former model admits he had considered the move for months before the axe fell.  “My contract was going to be up in August and I had to make a decision and satisfy my practical needs, a regular income and be comfortable, or satisfy my internal desire,” he told TV Week.  “My career wasn’t going to go anywhere if I stayed at E Street for the rest of my life.”  But father-to-be Denny will be back on screen sooner rather than later with a guest appearance coming up in A Country Practice, playing the part of 19-year-old mechanic Stewart Waterman.

Andrew goes beyond a joke
In his upcoming The Money Or The Gun special The Topic Of Cancer, Andrew Denton tackles the serious subject of cancer as it affects a group of teenagers — but it’s not a program that’s all of gloom and doom.  There are set to be many laughs to offset the tears.  “Cancer is the most fearsome word in the English language, so I hope we achieved what we set out to do,” Denton told TV Week.  “We wanted to reveal the truth about cancer and add that it’s possible to have it and lead a life, and that it doesn’t always mean death.” 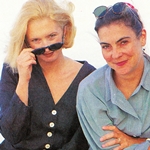 A pair of jokers
“Siamese twins” is how Fast Forward stars Marg Downey and Jane Turner describe their relationship.  The pair first met as 12-year-olds in the same class at a convent school in Melbourne. Their friendship has survived growing up, their early days of acting and the success of the D Generation and Fast Forward.  “We were always creating characters and doing sketches together at school.  Any opportunity to get up on stage,” Downey told TV Week.  “And we’d dream about what we’d do later in life,” to which Turner responds, “It’s all come true really.  We never envisaged we’d be performing together, but it just happens that for the past six years we have.”  The pair will soon be back on screen in the Fast Forward spin-off Full Frontal.

“When two people who have had chemotherapy put their heads together, they can make a real arse of themselves.  That is probably the worst bad-taste joke you’ll hear this week.  But coming from a teenager whose hair has fallen out after a course of the dreaded treatment, it takes on an entirely different context.  The “joke” is part of a remarkably uplifting hour of television called The Topic Of Cancer, part of Andrew Denton‘s occasional ABC series The Money Or The Gun. The Topic Of Cancer is the result of Denton’s contact with Canteen, a national support group for teenage cancer sufferers and their siblings.  The affinity Denton manages to establish with them is immediate, and it forms the basis of a program which has so much about it to recommend.”

Program Highlights (Melbourne, April 25-May 1):
Sunday:  ABC commemorates Anzac Day with four hours of coverage of the Anzac Day March (9am) and a repeat of documentary 44 Days (8.30pm), the true story of the RAAF’s No.75 Squadron, which defended northern Australia from Japan during World War II.  Sunday night movies are What About Bob? (Seven), Flight Of The Intruder (Nine) and K9 (Ten).

Monday:  In A Country Practice (7.30pm, Seven), Terence (Shane Porteous) and Rosemary (Maureen Edwards) help a local magistrate and his wife come to terms with his infidelity and homosexuality when he discovers he is HIV positive. 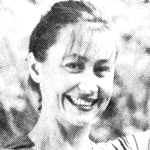 Tuesday:  Actress Tracy Mann (pictured) guest stars in GP (8.30pm, ABC), playing the part of Tanya, a single mother and career woman who turns to Ian (Tony Llewellyn-Jones) for counselling when she has trouble dealing with stress and the challenge in bringing up a child with autism.  In Law Of The Land (9.30pm, Nine), Harry’s (Shane Connor) farm goes up for auction, while Hamilton (Wyn Roberts) is on trial for poisoning his neighbour’s organic crops with insecticide.

Wednesday:  In Hey Dad! (7.30pm, Seven), after a spate of vandalism, Betty (Julie McGregor) becomes involved in Neighbourhood Watch.  Andrew Denton presents The Topic Of Cancer (8.30pm, ABC), a special in his series The Money Or The Gun.  US talk show host Phil Donahue celebrates his 25th anniversary with a two-hour special (8.30pm, Ten), featuring highlights from his daytime chat show that has clocked up almost 6000 episodes.

Thursday:  The Robinson family is rocked by tragedy in Neighbours (6.30pm, Ten).  In Getaway (7.30pm, Nine), Anna McMahon visits the historic town of Oatlands, Tasmania, and Tina Dalton gets a close look at mountain gorillas in Africa.

Saturday:  The final of the $400,000 Inter-Dominion, Australia’s richest harness race, is broadcast live from Albion Park Raceway in Brisbane (9.30pm, ABC).  The Best Bits Of The Late Show (10pm, ABC) presents the first in a series of highlights from comedy series The Late Show from 1992.