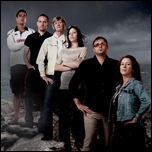 The controversial SBS documentary series Go Back To Where You Came From, putting a reality show twist into the ongoing debate on asylum seekers, is to be renewed for a second series with hopes that the concept will also be sold overseas.

AdNews reports that producers Cordell Jigsaw will be revisiting the concept for SBS, but will be adding in some surprising twists to keep the idea fresh.

Go Back To Where You Came From screened over three nights last month on SBS1, attracting the channel’s highest ratings for the year so far, with a repeat screening on digital channel SBS2.  Last week the six Australians to feature on the “reverse journey” of the refugees were reunited for a studio forum hosted by Anton Enus.

The first episode, screened on SBS1 on 21 June, was watched by an average of 524,000 viewers across the five major capital cities.  The second and third episodes were watched by 569,000 and 600,000 viewers respectively.  SBS reports that overall the series had a national audience reach (based on 5 minute consecutive viewing) of more than two million viewers plus more than 139,000 unique browsers to the show’s accompanying website and more than 115,000 views of online video content from the program.

The landmark series became a worldwide trending topic on Twitter and also gained the attention of the rival media outlets in Australia and the international media, most notably The New York Times.

Michael Cordell, co-owner and executive producer of Cordell Jigsaw, told AdNews that there had so far been no formal approach from any international broadcaster but the concept of Go Back To Where You Came From could be easily adapted for other international markets, specifically the UK and United States.

Permanent link to this article: https://televisionau.com/2011/07/sbs-to-go-back-for-a-second-time.html