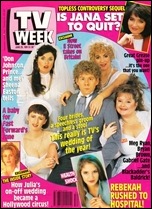 This really is TV’s wedding of the year!
Four brides, a speechless groom and a stool – this is TV’s wedding of the year as Craig Donovan (Steve Blackburn), the enigmatic heart throb from Fast Forward’s ‘Dumb Street’, decides to tie the knot in the Dumb Street cafe.  Like all TV weddings, this one doesn’t go exactly to plan as four brides – Danni (Gina Riley), Bobby (Jane Turner), Nikki (Magda Szubanski) and Shelley (Marg Downey) – arrive at the cafe all wanting to be the next Mrs Donovan, with one of them holding a secret.  Will this secret come out?  Who will become Mrs Donovan?  And, more importantly, why is Bob Hatfield (Geoff Brooks) not wearing any pants? 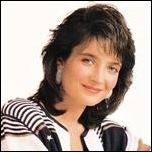 Is Jana set to quit?
The recent walkout by Jana Wendt over A Current Affair running a story on a hardware store staffed by topless females highlights the tense relationship between her and the Nine Network.  The TV Week Gold Logie nominee, who was missing from ACA for the next two nights, is also said to not be happy since Kerry Packer regained control of the network – citing editorial interference – and is concerned that the show will be hit hard by cost-cutting measures.  With her contract soon up for renewal, Nine will have to work hard to get her to re-sign.  There are suggestions that she may follow former Nine boss Sam Chisholm to the United Kingdom where he is now running the BSkyB satellite network, or even move to another network here in Australia. 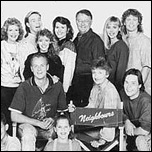 Export action!
With Neighbours (pictured) and Home And Away both well established in the United Kingdom, it looks like Network Ten’s E Street is about to join them.  Management from Westside Television, the producers of E Street, have just returned from overseas negotiations and E Street is set to debut in the United Kingdom, the Netherlands and Belgium by the end of the year.  Meanwhile, Grundy Television are hopeful that American audiences will support Neighbours with the show’s first 65 episodes now starting to air on KCOP in Los Angeles and WWOR in New York.  Success in these markets may lead to the series going into wider syndication across the US.  “The local stations are very enthusiastic about the show and they’re very aware that if Neighbours does well, we have 1400 more episodes to sell to them,” Grundy’s Bob Lloyd told TV Week.  Grundy’s are also currently working on a US-based series, Dangerous Women, which is largely adapted from the Aussie series Prisoner.  “The show has already been pre-sold around America to 40 per cent of the markets and is expected to air in Australia,” Lloyd said. 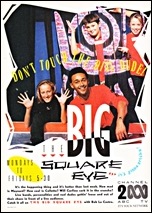 Briefly…
ABC’s newest afternoon series is the lively game show The Big Square Eye.  Hosted by former Neighbours and Wombat star Bob La Castra (pictured, centre), the show is taped before a live studio audience and features the latest in video clips, live performances and contestants from the audience taking part in quiz games.  “Everybody, including the crew, has a lot of fun.  Around the ABC it is known as the show everyone wants to work on,” La Castra told TV Week.

GP star Michael Craig, also an accomplished scriptwriter, has written the show’s 99th episode, which screens on ABC this week.  “It was difficult wearing two hats, actor and writer,” he told TV Week.  “I was very concerned that the actors should be happy with what they had to say.”

The Boys From The Bush, the Australian series that gained critical acclaim and high ratings in the UK, has still yet to screen in Australia even though it was shown on the BBC back in January.  A second series, starring Chris Haywood, Nadine Garner and Pat Thompson, is now already in production.   The Seven Network has still yet to announce a screening date for the series, and may choose to show both the first and second series back-to-back in 1992. 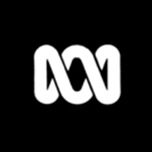 John Laws says…
”Despite the wails of those who say they abhor advertising, and those who would like to enshrine the ABC from the real world, the fact is that it is advertising which is likely to be the ABC’s extra lifeblood.  The SBS network has already calmly accepted that advertising is part of life, and already is using sponsorship to positive effect, without denting its credibility or causing shock waves of any kind.  The ABC, I believe, has little to fear from introducing corporate sponsorship of programs, and general advertising.  It has already willingly thrown itself into the “commercial” market by the promotion on a regular basis of its own ABC Shop products.  It is also used to some corporate sponsorship; for instance, Esso Night At The Opera.  I’ve heard no complaints about that series of fine programs, which might not even have happened had it not been for the financial support of the oil company.” 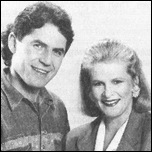 Tuesday: In GP (ABC), William’s (Michael Craig) dinner guest drops dead and his relatives demand a very unusual burial.  In Beyond 2000 (Seven), Dr John D’Arcy looks at how the sex capital of the world is coping with the AIDS crises, and Simon Reeve visits a Japanese workplace of the future.

Wednesday:  Seven presents a late-night delayed coverage of the first Test of the 1991 three-match Rugby League series, from Melbourne’s Olympic Park, between Australia and New Zealand.

Thursday:  In The Flying Doctors (Nine), several members of the RFDS team may have been unknowingly exposed to the AIDS virus.