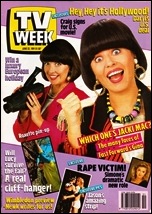 Making faces
Imitating the stars is a challenge that Fast Forward’s Gina Riley relishes – and even though the send ups are far from flattering, most of her “victims” love them.  The latest star to be sent up by Riley – Australia’s Funniest Home Video Show host Jacki MacDonald – is far from being offended.  “I’m flattered, not insulted,” MacDonald told TV Week.  “I think my ratings will probably increase now.  Everyone in the world watches Fast Forward, so I’m getting double exposure.  And there’s an advantage.  If I have to take a sickie, she can fill in for me!” But for Riley, despite the physical similarities with the video show host, the role was a challenge.  “I found her voice really very hard.  I thought it would be easy because it’s high… I had to watch hours and hours of tape to get it right,” she said.  And one of Riley’s celebrity send-ups is glamorous TV host Kerri-Anne Kennel, based on Good Morning Australia co-host Kerri-Anne Kennerley.  “I hope she likes it.  The name is hardly flattering I know, but it was the obvious one,” Riley said of the Kennel character.  And it seems Kennerley is a fan:  “I think Gina is hilarious and we all know that imitation is the highest form of flattery.  I think she’s terrific.”

Hey Hey it’s Hollywood!
Hey Hey It’s Saturday’s recent special from the newly-opened Warner Bros Movie World has won praise from visiting US television executives, with host and co-producer Daryl Somers invited to take the program to Hollywood.  “They told me they have Johnny Carson and David Letterman in America, but nothing at all like this,” Somers told TV Week.  “They thought it was a warm sort of show, with a genuine feeling of fun and camaraderie.  They couldn’t believe we do 40 a year.”  Hollywood’s Burbank Studios are expected to host the show in October.  Meanwhile, Somers and partner Ernie Carroll have been continuing plans for a London-based special later this year, and Hey Hey It’s Saturday has also been picked up for screening in New Zealand on TVNZ’s Channel 2. 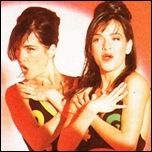 Mix ‘n match!
Neighbours twins Gayle and Gillian Blakeney have become the show’s latest pop stars with their single All Mixed Up being released in Australia and the UK this week.  The new single was written and produced by English hit-makers Stock, Aitken and Waterman – the same team who created pop stardom for Kylie Minogue and Jason Donovan.

Briefly…
TV Week Gold Logie winner Craig McLachlan is set to star on US network television with a role in an upcoming ABC network telemovie, The Savage Sea.  The production will be filmed entirely in Australia and also stars Ali MacGraw and Robert Urich. 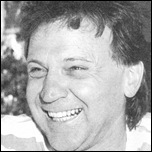 Sixties pop idol and former Sons And Daughters star Normie Rowe is returning to television as a presenter on Network Ten’s weekly magazine program The New Bricks And Mortar.

Former Hey Dad! star Simone Buchanan has been cast in her first dramatic role since leaving the long-running sitcom.  She will be guest starring in A Country Practice as an agoraphobic rape victim.

John Laws says…
”Spin-off TV series, like governments, work only some of the time.  That’s why it’s always a major gamble to attempt to capitalise on a successful show by doing another one based on one or more of the characters.  Hampton Court is a spin-off in that it features the Betty Wilson (Julie McGregor) character from the Hey Dad! series.  It deserves to succeed.  The first few episodes, without being spectacular, were funny and enjoyable.  It reminds me very much about the old British series Man About The House, though there isn’t the same concentration on the so-called “naughtiness” of a flat shared by both sexes.”

Monday:  In A Country Practice (Seven), Lucy (Georgie Parker) organises a camping trip which goes horribly wrong when she falls down a cliff while trying to save a kangaroo.  A mysterious intruder terrifies the Willis household in Neighbours (Ten).  Nine starts two weeks of late-night coverage of Wimbledon. 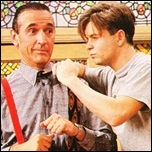 Wednesday:  Geraldine Doogue presents a Hindsight (ABC) special, Ming Dynasty, looking back over three decades of the Menzies era and his management of our country which resulted in lost economic opportunities.