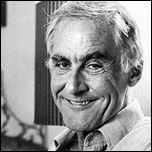 Ray Taylor, host of Australia’s first breakfast TV program, has died in Sydney at the age of 83.

Born in Yorkshire, Taylor came to Australia in the early 1950s with his new Australian wife, Lesley.  With a media background that only entailed a few minor roles with Canadian broadcaster CBC, Taylor enrolled in an announcer’s course and landed a job at radio station 2GN, Goulburn.

By the end of the decade the presenter with the cheeky streak was in Sydney, as host of ATN7’s breakfast program Today.  It was the first early morning show on Australian TV.

Taylor was later sacked from the show.  He told TV Times in 1964 that he was given no reason for the sacking but Sydney press reports at the time indicated tensions between him and the channel.

Today was cancelled three months after the sacking. 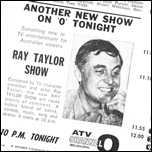 He then came to Melbourne in 1964 to join the lineup for new channel ATV0.  He hosted the channel’s opening night special, This Is It!, before launching a weekly late night variety show, The Ray Taylor Show.  The show, initially screening on Saturday nights, promised a more sophisticated alternative to the popular In Melbourne Tonight as well as an open-ended format.  “If our guests want to talk to 2.00am, and they are interesting enough, we will stay with them,” he told TV Times.

The Ray Taylor Show proved to be a frustrating experience – with Melbournians seemingly not warming to Taylor’s more mature style of humour and commentary.  “So many viewers here still aren’t mature enough to have a laugh at themselves or hear sex discussed without getting flustered.  It’s all too parochial,” he told TV Times early in 1965.

The show had also endured four different producers and a number of timeslot changes as the channel sought to gradually turn the show around into an In Melbourne Tonight-style clone.  Its last timeslot change saw it move to Monday nights directly up against IMT.

The Ray Taylor Show eventually wound up in March 1966.  The axing came just as Taylor was rehearsing for a role in an upcoming ABC play, Ashes To Ashes.

Taylor and his second wife, singer Annette Klooger, then went to the US where he was invited by a former ATN7 colleague, Digby Wolfe, to join the writing team for The New Bill Cosby Show.  He went on to then write for other American shows including All in the Family, Barney Miller, Dinah! and Cher.

He returned to Melbourne in the mid 1980s, to take on the early evening shift on radio station 3AW.  He then went to Sydney in 1987 to ABC station 2BL to present the breakfast program before retiring from broadcasting in 1990.