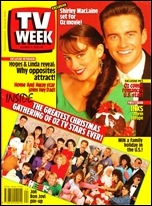 Hey Dad… meet your new co-star!
Rachael Beck, fresh from her role as Craig McLachlan’s sister in Home And Away, is set to join the cast of Hey Dad!  The former Family And Friends star impressed Home And Away producers enough that they offered her an ongoing role, but she was reluctant to commit to a 12-month run, so she instead auditioned for the Hey Dad! spin-off, Hampton House – with producers seemingly now keen to have her join Hey Dad! to fill the gap left by departing cast member Simone Buchanan.  In the meantime, Beck will be appearing in the Sydney Theatre Company’s production of A Little Night Music. 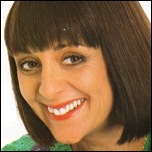 Denise set for a ding-dong year!
It has been a year of ups and downs for two-time TV Week Gold Logie winner Denise Drysdale.  On the downside, she departed Hey Hey It’s Saturday amidst controversial circumstances, but the exposure from being on the show has opened up an opportunity to develop her own programs.  She has taped a pilot for a quiz show called Guess What (featuring Wendy Harmer, Lou Richards and Wilbur Wilde as guest contestants) and is developing a sitcom which is likely to star Drysdale and is tipped to feature Noelene Brown, Rosie Sturgess and former Countdown Revolution co-host Tania Lacy.  At the same time, it appears likely that In Melbourne Today, the morning talk show she presents with Ernie Sigley, will go national in 1991.

All together now…
It was a daunting task for TV Week to try to assemble 11 stars in Sydney and 12 stars in Melbourne, representing all five TV networks, for a Christmas photo shoot.  The chances that all would be available at the one time was very slim, but the networks co-operated and the photo shoot was a success: 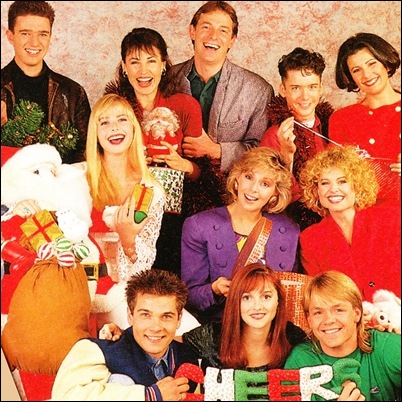 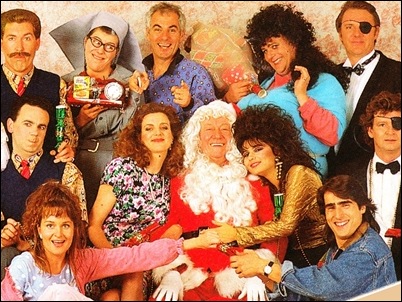 Briefly…
Former E Street regular Melissa Bell is joining the cast of Neighbours, taking on the role of Lucy Robinson, the youngest of the Robinson children.  Bell, 18, will be the third actress to take on the role, following Kylie Flinker and Sasha Close.  An upcoming storyline will see Lucy sent home from an elite boarding school after a run-in with authorities, to face the wrath of her father, Jim (Alan Dale).

Fast Forward’s Pixie-Anne Wheatley (Magda Szubanski) and Home And Away’s Craig McLachlan (pictured, above left) made an odd couple in the Seven Network’s upcoming new year promos.  In the two-minute clip, dizzy Pixie-Anne decides to make a play for McLachlan.  It culminates in her making a bungy jump from a helicopter to hand deliver him a bunch of flowers. “Magda did all her own stunts, except for one shot,” producer-director Mitch McManus told TV Week.  “She had to hang upside down by her ankles from seven metres above the studio floor, so she gets the award for best sport of the promo!”  Meanwhile (above right), Wheel Of Fortune hostess Adriana Xenides is saved from a demolition ball by Victor, the ‘very unattractive man’ (played by Peter Moon) from Fast Forward’s ‘Good Morning Moscow’ skit.

John Laws says…
”It seems that now we’ve bade a temporary goodbye to most current affairs programs on TV (maybe they’ll make a speedy comeback in the event of a shootout in the Gulf!), we can settle down for a good laugh over Christmas.  I’ve never known a period where so many “sitcoms” are being screened at the same time.  It’s as if the beleaguered television industry has decided it must giggle its way through the current economic crisis – and wants viewers in on the joke.  It’s true enough, of course, that we could all do with a bit of a laugh from TV.”

Sunday:  Sunday night movies are Santa Claus: The Movie (HSV7) and Courage (ATV10).  GTV9 screens the first of the two-part mini-series, Phantom Of The Opera.

Wednesday:  In Hey Dad! (HSV7), Betty (Julie McGregor) is studying Japanese for her role in a play for the musical society.

Friday:  In a rare truce between competing programs, Today and Good Morning Australia both wind up for the Christmas break on the same day and will return together on the same day in the new year.  HSV7’s Friday night movie is the Australian film Bush Christmas, starring John Ewart, Nicole Kidman, John Howard, Mark Spain and James Wingrove.