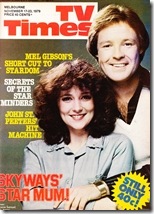 Mum’s the word for Skyways’ Kelly
Joanne Samuel caused a stir when, unmarried, she was written out of the ABC series Certain Women to have a baby.  These days, even with movie roles in Mad Max and Alison’s Birthday and an ongoing role in the Seven Network’s Skyways, Samuel never regrets being a single parent to 4-year-old daughter Emma, though she does have the help of a nanny:  “People may have some strange ideas about me not being married, but that is their business.  My friends and the people I work with don’t think it out of the ordinary.  I believe you should have children when you are young and can fully enjoy being with them.”  Samuel (pictured, with co-star Ken James) looks forward to expanding her movie career as well as television, but at the moment is happy as airport kiosk girl Kelly in Skyways:  “She is a nice and nice girls are hard to play unless you have a deeply written character.  Kelly hasn’t, and I just have to play her straight.  She is not my type of girl.  I reckon she is a bit of a dag, but I’m happy playing her.  As for Simon (Ken James), I wouldn’t take all the foolishness from him.  If he was a friend I might try to help him out, but I certainly wouldn’t take all that from a boyfriend.  I’d give him a boot out the door very quickly!”

Lane man goes
Peter Faiman, director and producer for GTV9 on shows including The Don Lane Show, will move to Sydney next year but remains associated with the Nine Network.  This is despite reports that Faiman had received a generous offer to join Rupert Murdoch’s TEN10 in Sydney.  Faiman’s move to Sydney will allow him to concentrate on production and to give him a new start after 16 years producing variety shows from Melbourne. 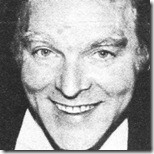 George in the jug!
Actor George Mallaby (pictured), formerly of Homicide, The Box and Cop Shop, is joining the cast of Prisoner.  Mallaby will play a social worker, Paul Reid, in the 0-10 Network series and is currently signed on for thirteen weeks.  “After Cop Shop I didn’t intend signing any long-term contracts in series.  I’ve signed to Prisoner for 13 weeks and if the pressures build up like they have in the past, that will be the end of it.  But if the same pressures aren’t there, I could well make the role an ongoing thing.  I shall also be writing for Prisoner, which is good, because I have always enjoyed scriptwriting and it was something I had to curtail while doing Cop Shop,” he told TV Times. 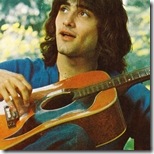 The fall and rise of Johnny Lo Piccolo
In the late 1960s, an 11-year-old piano accordion player called Johnny Lo Piccolo was a hit act on the TV variety shows at the time.  And now, as John St Peeters (pictured), he is still a much sought-after TV performer, though the piano accordion was put away long ago.  Since returning to Australia, after some years in Canada where he launched a pop career with 23 singles released, St Peeters has formed a cabaret act, John St Peeters and the Sharelles, and is a regular performer on shows including Countdown.  His songs are currently on the charts in Spain and South Africa, and his latest song, You, You’re The One, will be Australia’s entry in the upcoming Music Expo in Miami.  Also, as a frequent guest host on Countdown, St Peeters is showing potential that could earn him a TV hosting job.  As well as naming Elvis Presley as an inspiration when he was younger, St Peeters was also inspired by Graham Kennedy, particularly as he appeared many times on Kennedy’s In Melbourne Tonight.  “I still see Graham now and then.  I went to the premiere of his movie The Odd Angry Shot and spoke to him afterwards.  He has given me a lot of encouragement,” he told TV Times. 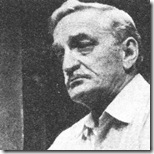 Briefly…
Frank Wilson (pictured), now back in Melbourne for the stage show Travelling North, has spoken out about his sacking four years ago from hosting GTV9’s New Faces talent show:  “In the last few years I wasn’t doing enough.  I was only doing that show and I was going stale.”

The cast of The Sullivans are expected to tour the United States in the new year in a push to sell the show to the big networks there.

Viewpoint: Letters to the Editor:
”As a fan of the good, old movies, I would like to say how disappointed I was to have missed The Naked Jungle recently because it was put on so late at night.  On this particular night we had: 7.30 Cop Shop, 8.30 Quincy, 9.30 Police Woman, 10.30 The Naked Jungle.  Three cop shows in a row were completely unnecessary, not to mention boring.  Being a working person, I could not wait up any longer and consequently had to miss a great movie.” A. Ribaudo, WA.

“We have just watched the final episode of Starsky And Hutch and would like to thank QTQ9, Brisbane, for screening it over the past four-and-a-half years.  We would also like to thank them for starting repeats again in November.  We are sure a lot of people will appreciate that.  It’s sad to see the end of a great series, but we hope it means we’ll be seeing a lot more of its stars, David Saul and Paul Michael Glaser, as they are very talented actors.” J & L Clifford, QLD.

What’s On (November 17-23):
ABC’s weekend is dominated by the Dunhill Australian Open Golf Championship with live coverage on Saturday from 11.00am to 5.35pm, and Sunday from 11.00am to 6.00pm.  GTV9 presents cricket with the McDonald’s Cup on Sunday and Wednesday.

HSV7 presents a one-hour special, The Best Of Norman Gunston, on Saturday night.

GTV9 crosses to Lake Karinyup Country Club for live coverage of the WA Open Golf Championship, screening Thursday and Friday from 4.30pm to 6.00pm and then from 7.30pm to 8.30pm.

The Don Lane Show presents its final episode for 1979.

Sunday night movies: Battle For The Planet Of The Apes (HSV7), The Late Show (ATV0).  No movie on GTV9 due to cricket telecasts up to 10.30pm.  ABC presents Banana Bender, the final in its series of Australian plays, starring Maurie Fields, John Hargreaves and Lyndel Rowe.