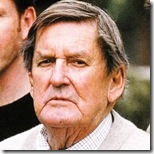 Veteran Australian film and television actor Ray Barrett has died in a Queensland hospital after suffering a brain haemorrhage.  He was 82.

Starting his career in Brisbane radio at 16, Barrett moved to Sydney in his early 20s and then took his career abroad.  A ten-month stint in the early British TV series Emergency Ward 10 led to other roles in series including The Troubleshooters, The Avengers, Doctor Who, Z Cars, The Saint and even as a voice artist on The Thunderbirds and Stingray.

Returning to Australia in the 1970s, Barrett became a familiar face with appearances in films including Don’s Party, The Chant Of Jimmie Blacksmith, Goodbye Paradise, Hotel Sorrento and the 1995 remake of Dad And Dave: On Our Selection.

Barrett also had an ongoing role in the ABC drama series Something In The Air.

His last acting credit was in the film Australia.