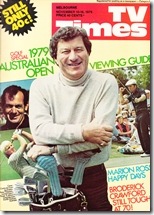 ABC’s biggest golf coverage Players from five continents – Australia, Asia, Africa, Europe and North America – will compete in this year’s Dunhill Australian Open, to be telecast on ABC this week in its largest golf coverage ever undertaken.  More than $8 million of outside broadcast equipment will be used at Melbourne’s Metropolitan Course.  ABC’s …