Countdown – 200 not out!
In less than five years, Countdown has progressed from a hesitant, experimental program to a powerful force in the pop industry.  The program claims a weekly audience of over four million and superstars are scrambling for an invitation to appear.  And, even though the show’s host and talent co-ordinator Ian ‘Molly’ Meldrum (pictured) is often mumbling on camera, he is an industry legend.  The ‘Molly’ nickname originated from a regular column that Meldrum wrote for Go-Set magazine that was referred to by Melbourne radio identity Stan Rofe as “Molly’s Piece,” as it could be a bit bitchy.  The ‘Molly’ reference was back again when pop star John Paul Young introduced the host as “boring Molly Meldrum” in the third episode of the show.  The name has stuck ever since.  Producer Michael Shrimpton recalls the development of the show: “When we started we had just five film clips from overseas and we just used them over and over, just to add overseas acts to the show.  Now we get offers from all over the world for first-release material, and whenever stars visit they want to appear on Countdown.  There is no doubt about the respect the show has.”  Shrimpton also credits Countdown as breaking Eurovision Song Contest winners ABBA into the Australian market: “ABBA were nothing in this country, but Countdown picked them up and look what happened.  An album track, Mamma Mia, was released as a single just for Australia.”  Local bands such as AC/DC, Skyhooks, Hush, Sherbet, Dragon and The Angels can also credit Countdown for their big breaks which have led to Australian and international success.  But despite the countless acts that have appeared on the show over its first 200 episodes, its biggest guest star was one Prince Charles – to which Molly casually recalled a recent trip to London: “I saw your Mum in an open carriage in the Mall.”  The Prince frostily replied, “do you mean Her Majesty The Queen?”

Gunston in union row
Norman Gunston is in trouble with Australian journalists following a press conference in Sydney for visiting American evangelist Dr Billy Graham.  In a letter to Actors’ Equity from Barry Porter, president of the NSW branch of the Australian Journalists Association, complaints were made of interference of ‘”non-AJA members” at the press conference.  Although Gunston is not specifically mentioned in the letter, it is known by Actors’ Equity that he is a target of complaints from the AJA.  John Eastway, producer of The Norman Gunston Show, said that Gunston (played by Garry McDonald) never sought to dominate press conferences: “He usually waits until there is a gap in the questions.  At the Billy Graham press conference, he put his questions 20 minutes after the conference had begun – and when he had finished, the proceedings continued on as before.  I think the whole thing is a joke.” 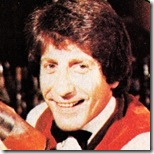 So you want to be a …
The Young Doctors star Joe Hasham (pictured) has been trying out a number of jobs in different fields, but it’s not because he is down on his luck as an actor.  Instead, the job-hopping is all in the name of entertainment as Hasham introduces viewers to a different occupation each month in a segment on The Steve Raymond Show.  As well as introducing the segment he also demonstrates what the job entails.  Previous segments have seen Hasham as a policeman, garbage collector, barman, brewery worker and a shearer.  Apart from his acting interests Hasham would like to move into the area of producing programs such as telemovies: “But, after my family, acting still comes first at the moment.”

Phones ran hot at ABC recently following a newspaper report that Countdown was expanding to a daily two-hour format as well as the usual Sunday episode.  The truth is that Countdown will continue in its present format.

A documentary which claims to reveal the identity and whereabouts of some of the world’s most wanted war criminals will probably be screened by the Seven Network in August.  The documentary, The Hunter And The Hunted, was made by Sydney film-makers John Oakley and Bill Bemister and was partially financed by Seven.

Viewpoint: Letters to the Editor
”I appreciate the efficiency with which Mastermind is organised but I find it too rigid and unfriendly.  Could we have the occasional laugh or just a smile?”” P. Bartok, NSW.

“It was with pleasure and relief I read in TV Times (5 May 1979) of the extended help coming from the Australian Centre for Visual Television (ACVT) to help and benefit the deaf in understanding and enjoying TV.  It will certainly help the deaf feel TV is for them too.” M. King, NSW.

“It amazes me why, on commercial stations, some advertisements aim at degrading children who live in the city.  We all know that hens lay eggs and cows give milk.  Why do some advertising agencies persist in making city children look stupid by saying milk comes from a bottle and eggs come from cartons?” J. Levi, SA.

On the afternoon before Countdown presents its 200th episode, ABC’s Sunday Spectrum takes a special look at a week in the life of Countdown’s production unit – with sequences shot in discos, record companies, studios and concerts, as well as glimpses of the producers at work and home. 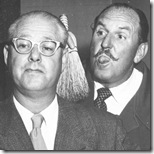 This Fabulous Century (HSV7, Sunday) recalls the careers of Jack Davey and Bob Dyer (pictured), who both dominated Australia’s radio airwaves.  Their famous catchphrases such as ’Hi Ho Everybody!’ and ‘Happy Lathering Customers’ became the most familiar words on radio.

HSV7’s Friday afternoon children’s program Stax looks at the Jewish religion and talks with 13-year-old Gerard, who has just celebrated his bar mitzvah and is learning Hebrew.

Sunday night movies: Twilight’s Last Gleaming (HSV7), Cabaret (GTV9), The Outlaw Josey Wales (ATV0).  ABC presents the BBC production of Shakespeare’s Richard II, the first of the British broadcaster’s series of 37 Shakespeare plays to be produced and screened over the next six years.