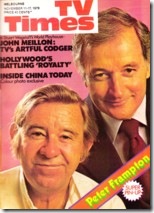 A little bit of what John fancies
Although he’s been an actor since the age of 11, John Meillon (pictured, with Stuart Wagstaff) has never been a walk-on, say-a-few-words, walk-off-again actor… a bit player. But that will change with a role in Bit Part, one of the series of plays featured in ABC‘s Stuart Wagstaff’s World Playhouse. “This play is quite funny really. It’s a sort of joke in the industry, ‘Hello, you’re finally playing a bit part’,” he told TV Times. The veteran actor had declined offers for bit parts in the past, instead choosing the maintain a certain level in the roles he’s accepted: “If you want to – with all due respect – be in things like The Restless Years, The Young Doctors and those Crawford things, if you want to do that, well, there is work. But to me the quality work has always been with ABC. My maxim has always been quality over quantity.”

More of Parkinson’s lore!
British TV interviewer Michael Parkinson is due to come to Australia in early 1979 to record a series of shows for ABC. Parkinson’s Saturday night series has been a British favourite for seven years and has been screening on ABC since earlier this year. It’s also been revealed that Parkinson was offered the chance to host the Nine Network’s upcoming current affairs program 60 Minutes but declined as it meant permanently relocating to Australia. 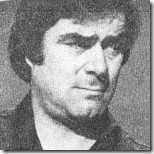 Happy Dave is here to stay
British comedian Dave Allenby (pictured) first came to Australia in 1970 to compere the Beach Boys concert tour. The sunshine and opportunities for future work was enough to lure him back permanently. Now settled with his family in Australia, Allenby is also settled in as host of the 0-10 Network’s new game show Perfect Match, where husband and wife contestants are asked questions about each other: “The format is just right. It’s relaxed and I can crack gags and ad-lib as much as I like.”

Briefly:
The cast of Cop Shop celebrated the show’s 100th episode with a special lunch courtesy of the Seven Network, while Nine‘s The Young Doctors has just taped its 500th episode. 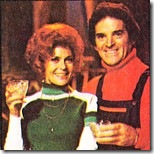 An album of Irish songs released by The Saturday Show‘s John MacNally (pictured with co-star Suzanne Steele) has sold more than 120,000 copies, with a single due to be released in time for Christmas and a second album next year.

A five-part documentary series China – The Human Face has been made by Film Australia, breaking the long-standing ban on Western film crews entering the nation. The documentary is expected to screen early in 1979.

Viewpoint: Letters to the Editor:
“I hope that ABC can sell The Truckies overseas. People should understand that Australian truckies’ long hauls are not like those in smaller countries. I have been married to a truckie for over 27 years and we all wait to see who the next program will remind us of.” B. Longhurst, NSW.

“Why doesn’t ABC screen some Elvis Presley movies? When Elvis died only capital city stations showed his movies. But country people who simply receive ABC would like to see his movies too.” E. Eames, QLD.

What’s On (November 11-17):
11 November is Remembrance Day, and HSV7 takes time out for two minutes silence at 11.00am, while GTV9 presents a special to commemorate the 60th anniversary of Remembrance Day.

Australian series Glenview High returns to HSV7 on Saturday night for screening over the summer months.

On Thursday, GTV9 begins four days’ coverage of the Australian Open Golf Championships, live from Sydney – with four hours of coverage on each of Thursday and Friday, but interrupted by The Mike Walsh Show and US soaps Days Of Our Lives and The Young And The Restless.