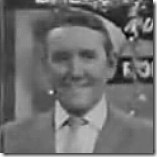 Bob McGready, one of the pioneer presenters in the early days of regional television, has died at the age of 85.

Born in Ireland, McGready came to Australia in the late-’40s after war service with the Royal Navy.

After working for Sydney newspaper Truth and later in advertising, McGready moved to radio station 2GZ Orange as a news editor and, while there, hired a young breakfast announcer named John Laws.

With the advent of regional television in the ’60s, McGready devised a comedy program called Grocer And Madam for local station CBN8.  The program then evolved into a quiz program, Jackpot Quiz, which ran for over a decade.  As well as presenting the program locally in Orange, McGready also travelled to Canberra, Newcastle, Sydney and Brisbane to present local versions of the same program.  As with many regional TV programs of that era, there is not much archived or recorded in history about Jackpot Quiz.  However, a rare clip of the program, which appears to be from McGready’s final edition of Jackpot Quiz at CBN8, now appears on YouTube:

Twenty years ago, McGready moved to the Byron Bay district in NSW and became involved in community radio at local station BAYFM, and from 1993 presented a Saturday morning music program until only two years ago.

The funeral service for Bob McGready, who in 2001 proudly claimed to be Australia’s oldest radio broadcaster, was held at the Byron Bay Community Centre which is home to BAYFM.

Permanent link to this article: https://televisionau.com/2008/11/bob-mcgready.html