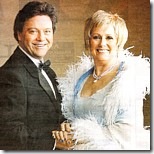 Green Lurex one-pieces with bell-bottoms, shirts with long fringes and hours on the beach in the blistering sun – some of the less-favourable things that Philip Gould and Debra Byrne (pictured) recalled from their days in the popular Young Talent Time, in an article that featured in yesterday’s Herald Sun newspaper.

But despite the glaring fashions and the environmental hazards associated with working on the program, both Philip and Debra remember fun times just “being kids” and the fond friendship they shared.

The pair have had their career paths cross a number of times since they appeared on Young Talent Time when it first began on Melbourne’s ATV0 in April 1971, but it has been almost thirty years since they’ve worked together.  Now they are together again in the upcoming musical, Follies, being staged at Melbourne’s Arts Centre by The Production Company.  The stage production also features John Diedrich (Bluey, Special Squad), Judi Connelli, Nancye Hayes, Patti Newton and Charles ‘Bud’ Tingwell. 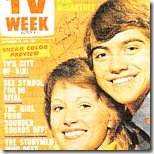 But for Philip and Debra (pictured, right, in 1973), working together after so many years is not a struggle.  “It’s like nothing’s changed.  We’re back where we were.  We can still have a giggle and we know what sets each other off,” Philip told Herald Sun’s Harbant Gill.  “We’re like brother and sister,” said Debra, “you just pick up from where you were, because you know each other in such a deep way.”

Follies is being performed at the State Theatre, Arts Centre, Melbourne, July 16-20.

Permanent link to this article: https://televisionau.com/2008/07/ytt-two-some-back-on-the-stage.html