Community TV gets a three-year extension 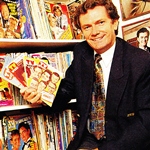 Mike Bailey, former ABC and Seven Network weather presenter, has died in hospital, surrounded by family, after a recent illness.

He left ABC in 2007 for an attempted move into politics, contesting Joe Hockey in the North Sydney electorate.

He also wrote for the The Sun-Herald newspaper and worked in radio, including 2GB, 2KY and Radio 2. He later returned to television to present the weekend weather reports for Nine News in Sydney.

He was a course co-ordinator and lecturer in Journalism at Macleay College in Sydney. He continued to act as facilitator, host and guest speaker for many functions for both corporate and charity groups. In 2020 he was awarded a Medal of the Order of Australia in the Queen’s Birthday Honours.

Some really sad news..former ABC weather presenter Mike Bailey has died in hospital after falling ill recently. He was superb at his craft and was a genuinely nice man. My sympathies to his family and friends. pic.twitter.com/nK5oavuzBm

Permanent link to this article: https://televisionau.com/2021/06/obituary-mike-bailey.html