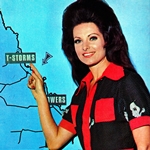 Since its inception in 1964, Melbourne’s ATV0 had struggled to get a significant hold of audiences when it came to news. Different formats, timeslots, newsreaders and titles were all tried and often without much success.

A revamp to a one-hour bulletin in 1978 was another in its string of casualties. But there were high hopes coming into 1979, 40 years ago, when the station had signed up Brisbane TV personality Annette Allison to read the news with long-time newsreader Bruce Mansfield.

Allison had been on TV in Brisbane for 15 years and was well established as a versatile TV presenter, appearing on variety shows, chat shows and was weather presenter for a time as well.  Her arrival at ATV0’s new-look Eyewitness News was heralded with full-page newspaper ads: “Bruce Mansfield Is Being Seen With Another Woman. That’s News” It was an era where female newsreaders were still something of a novelty in Melbourne television, especially for the early evening news. But with the ’80s approaching, such headlines were already seen as crass and sexist, with one vocal critic being radio talkback host Derryn Hinch, who reportedly said it was degrading and in conflict with what was meant to be a serious news service.

As well as reading the news at 6.00pm, Allison was also hired to co-host the daytime talk show Everyday, with station veteran Roy Hampson.

Despite good chemistry between its two news presenters, the 1979 Eyewitness News revamp sadly turned out to be as short lived as many of its predecessors. By the end of the year Mansfield and Allison were relieved of their newsreader roles. One newspaper columnist felt that the two news presenters were being made scapegoats for more systemic troubles within the channel.

Allison continued to co-host Everyday, later to become Good Morning Melbourne, and Mansfield stayed at the channel for several more years in various roles including booth announcing for station promos and shows such as Young Talent Time, Perfect Match and Personality Squares.

Eyewitness News received another change in format late in 1979 for the summer months, with news director Michael Schildberger and journalist Peter Hanrahan taking over as newsreaders. But when the channel changed frequency to ATV10 in 1980 it triggered another change, with David Johnston hired and he and Jana Wendt taking on the newsreader roles. The news bulletin then became competitive against the channel’s older rivals and finally could enjoy an era of dominance.

The relaunch of Eyewitness News in 1979 is among the latest additions to Classic TV Guides:

Permanent link to this article: https://televisionau.com/2019/02/classic-tv-guides-eyewitness-news.html