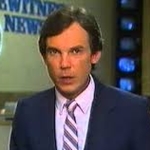 Former television journalist and newsreader Charles Slade has passed away.

After a successful career in aviation, Slade made the move to media in the early 1980s. He started at Melbourne’s Fox FM before joining Network Ten‘s Good Morning Australia and Eyewitness News in Melbourne.

After leaving Ten he moved to ABC to host its weekly Sports Arena program.

He joined National Nine News in 1994 and stayed for ten years as a senior reporter. Among his accolades at Nine was sharing a TV Week Logie Award in 2001 for most outstanding news coverage of the World Economic Forum protests in Melbourne.

Vale Charles Slade. One of the great TV reporters in the @tennewsmelb heyday. A true gentleman. This is a photo of the old news team circa 1987. pic.twitter.com/LthUli73Gl

Permanent link to this article: https://televisionau.com/2018/05/obituary-charles-slade.html