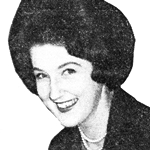 Melody Iliffe, regarded as the first female newsreader on Australian television, has died.

As Melody Welsh, her career in television began working behind the scenes at Brisbane’s QTQ9. She was then plucked from obscurity to read the station’s news beside Don Seccombe.

It was the first time a female was appointed as newsreader, an achievement recognised with a special TV Week Logie Award in 1965.

She went on to marry QTQ9’s children’s host Jim Iliffe and they had three children.

Although focusing on motherhood, Iliffe continued to do part-time TV newsreading and regularly appearing in commercials.

She continued to read the news into the 1980s and in 1984 co-hosted QTQ9’s celebration of 25 years of television in Queensland.

Permanent link to this article: https://televisionau.com/2017/09/obituary-melody-iliffe.html