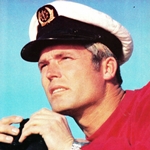 American actor Ty Hardin has died at the age of 87.

Born Orison Whipple Hungerford Jnr in New York City, Hardin starred in early American series such as Cheyenne, 77 Sunset Strip and Bronco. But the actor was also to have a leading role in Australia.

Hardin was cast in the role of charter boat captain Moss Andrews in the adventure series Riptide. His casting in the series was hoped to increase the show’s value on the international market.

Produced in colour for the Seven Network between 1967 and 1969, Riptide was filmed on location in Sydney and North Queensland. Hardin saw it as an opportunity to settle in Australia after leaving Hollywood and having worked in Europe for four years. “I went to Europe because I felt I would have more freedom to create and continue my acting career,” he told TV Times in 1969. “I have the same feeling in Australia.”

Riptide was a decent performer in the ratings but failed to gain positive critical reviews. Because of its high cost — reported to be $2 million over 26 episodes — and lack of international interest (although it was picked up in Germany, re-titled SOS Charterboot!), it was not renewed for a second series.

Permanent link to this article: https://televisionau.com/2017/08/obituary-ty-hardin.html