When Temptation came to Katamatite 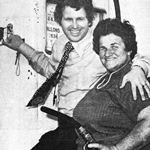 It’s not often that the small Victorian town of Katamatite makes news, but in September 1973 it was the most famous town in Australia.

The reason for its sudden fame was a woman called Dot Kilgour, a mother of three who operated the town’s single-pump petrol station with her husband Harry.

It was a big day for the town (population: 365 at the time) when Great Temptation host Tony Barber visited the Kilgours to deliver Dot’s prizes.

Barber, a TV Week Gold Logie winner earlier the year, was welcomed at the Kilgours’ with a home-cooked casserole before going out to meet the various townsfolk and to sign autographs.

He described Kilgour as a “pressure player” and “super cool”, though she remained modest. “I don’t think I’m a quiz champion, rather someone who has struck it lucky,” she told Listener In-TV. “I think I won because I’m a great reader. Everything from toilet tissues to the ads and encyclopedias. Harry wrote to Great Temptation last year saying I could answer all the questions and to give me a go. They did.”

And what about the show’s host? “Tony? He’s a bright, outgoing sort of fellow. I’ve been watching Tony for years — ducking backwards and forwards from the kitchen sink to see his show on the telly.”

So what did Dot plan to do with her winnings? “I don’t know what we’ll do with the money,” she said. “We have to paint our house. Some of the prizes I’ll have to sell. The mink coat, for example. I’m not a fur coat-minded person. So you can see we’re just normal country working class people.”

And Katamatite has probably never rated much of a mention anywhere ever since. Permanent link to this article: https://televisionau.com/2017/06/when-temptation-came-to-katamatite.html