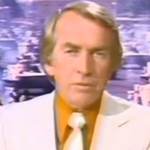 Brian Cahill, one of the pioneers of Brisbane television, has died at the age of 84.

With a background in radio, Cahill’s television career began on the night Brisbane’s BTQ7 launched on Sunday, 1 November 1959. He was the station’s first newsreader.

In an era when on-air talent were often required to fill multiple roles, Cahill also took on the role of performing on programs like Theatre Royal. 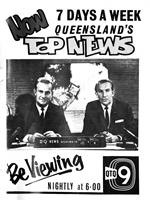 He continued to work in radio, while his television career went on to involve all three commercial channels in Brisbane. In the 1960s he worked alongside Don Seccombe at QTQ9 (pictured). He had a return stint at Seven before joining TVQ0 in the late 1970s.

After television he moved into politics, joining the National Party, and later worked in theatre.

In 2009 Cahill made a guest appearance on Seven News for BTQ’s 50th anniversary:

Brian Cahill is survived by his wife Denise and their five children.

Permanent link to this article: https://televisionau.com/2015/03/obituary-brian-cahill.html