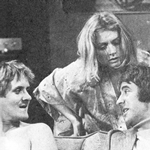 These days the title Who Do You Think You Are? refers to a celebrity-themed genealogical series created by the BBC and franchised around the world, including Australia, where it has been a hit for SBS.

Back in the Seventies, Who Do You Think You Are? was a show of a much different kind. It was a comedy series produced by ABC, starring Barbara Stephens (then famous as an air hostess in TV commercials for British Airways) as Kelly, a young woman recently separated from her husband Tony (Stephen O’Rourke) and living with flatmate Tom (Tony Llewellyn-Jones).

The first episode, broadcast on 21 September 1976, sees Kelly throwing a party to celebrate her new-found freedom, but makes the mistake of inviting her husband. 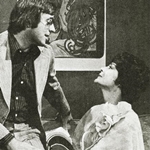 WDYTYA seemed to get by without much fanfare. Even ABC’s own TV magazine TV Times only gave it a cursory mention when it launched. It didn’t get a mention again in the magazine until a month later — with the appearance of guest star Elaine Lee (pictured with O’Rourke).

The series continued in a fairly unremarkable fashion through to its 13th and final episode airing in mid-December. It almost could have slipped away without trace, except that TV Week columnist Tony Fawcett felt it was an underrated gem that the ABC was foolish to let go:

“The fact is WDYTYA is one of the best pieces of Australian video comedy yet. Barbara Stephens, the zany lady from those airline ads, is perfect as the wickedly funny miss called Kelly who has two big problems in her life — her estranged husband and her oafish flatmate, both more interested in discovering her body than her mind. And if ever an actor deserved to win an award it’s Tony Llewellyn-Jones as the flatmate, Tom, who lives off his fantasies of beautiful women, but crashes back to the realities of beer cans and ockerdom.”

“Perhaps it’s too late to persuade the ABC to make more of this series, but it’s certainly not too late to exert pressure for it to keep together the writing team, led by John O’Grady, which made it possible. These writers need to be encouraged to continue writing comedy.”

But it seems the ABC was happy to let the show disappear. “Frankly, it’s a great disappointment,” one ABC staffer is said to have told Fawcett in a hushed tone. “It’s vulgar, not the least funny. It’s not even clever, not like (British series) Steptoe And Son.”

So what happened to the names behind this apparent hidden gem? 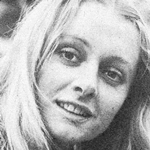 Stephens (pictured) continued to appear in commercials but also made guest appearances in a number of ongoing series including Run From The Morning, Chopper Squad, Mother And Son, A Country Practice, GP, Water Rats and Home And Away. O’Rourke later appeared in Number 96, Tickled Pink, Prisoner, Blue Murder, Heartbreak High, Bullpitt! and Headland.

O’Grady went on to produce a number of ABC comedies including Mother And Son, Eggshells, Dearest Enemy and After The Beep.