The new ‘man’ in Kym’s life
Kym Wilson (pictured) has had to postpone her planned April wedding to Jeremy Sims due to accepting a guest part in the upcoming Nine Network series The Man From Snowy River. She will be playing the part of Charlotte Holloway, a love interest for Frank Blackwood (Rodney Bell). “I’ll be spending a month on the series all up, and commuting back to Sydney to do Video Smash Hits,” she told TV Week. The series, which also stars Andrew Clarke, Victoria Tennant, Wendy Hughes, Brett Climo, John Stanton and Guy Pearce, has already started screening on American cable TV to wide acclaim. It is set to screen on Nine later in the year. 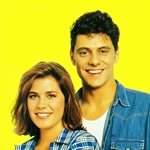 Moving Out star moves in to ACP
Vince Colosimo and Jane Hall have scored lead roles in the upcoming Network Ten series of A Country Practice. Colosimo will play the part of Danny, a policeman from Sydney’s western suburbs who finds himself posted to the country, while Hall plays town vet Jess Morrison. Colosimo rose to fame in the early ’80s in films Moving Out and Street Hero. Since graduating from the Victorian College of the Arts he has worked mostly on stage but has appeared in TV series All The Way and Seven Deadly Sins. For Hall the new role is a return to drama after starring in the sitcom All Together Now. 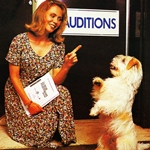 Who will be top dog?
There were dogs of all shapes and sizes auditioning for the title role of Nine‘s new sitcom The Bob Morrison Show — but the successful pooch was three-year-old Bob (pictured with series star Nikki Coghill). The debut episode, airing this week, sees a homeless Bob taken in by the Morrison family — played by Andy Anderson, Coghill, Elissa Elliot and Chris Lyons — with the dog providing a witty view of life with the family, whom he calls “dry noses”.

“The word ‘delicious’ is not one that usually springs to mind when searching for adjectives to describe a television series, but in this cast it’s apt. If the British series of a couple of years ago, House Of Cards, was tasty — which it was — then its sequel (To Play The King) is, indeed, delicious. If any television can be called first-class, then this should rank with it.”

Sunday: The Rugby Union Five Nations (1.30pm, Ten) features Wales versus France, from Cardiff, and England versus Ireland from Twickenham. The Fast Forward special The Making Of Nothing (7.30pm, Seven) takes viewers on a journey through the making of the great Aussie flick From Nothing To Nowhere. Sunday night movies are F/X2 (Seven) and City Slickers (repeat, Ten). Nine again has Winter Olympics (8.30pm) followed by One Day International (11pm).

Tuesday: In Home And Away (7pm, Seven), Tug (Tristan Bancks) appears to have given up any desire to get his life back on the right track. In Blue Heelers (7.30pm, Seven), the discovery of an abandoned child raises painful memories for Nick (William McInnes). The Investigators (8pm, ABC) returns for a new series. In GP (8.30pm, ABC), William (Michael Craig) brings Dr Martin Dempsey (Damian Rice) to the Ross Street surgery and offers him a job on a trial basis.

Wednesday: Rachael Beck returns for a guest appearance in Hey Dad! (7.30pm, Seven). In Newlyweds (8pm, Seven), Peter (Chris Gabardi) finds unemployment hard to cope with and goes off alone to do some soul searching. There is a double dose of AFL Foster’s Cup with live coverage of Fitzroy versus Geelong (8.30pm, Seven) followed by delayed coverage of Adelaide versus West Coast Eagles (11pm, Seven).

Thursday: In Beyond 2000 (7.30pm, Ten), Iain Finlay visits the UK and looks at a new invention that is set to take on mobile telephones; Anthony Griffis meets a scientist who uses polar bears in his study of pollution levels in the Antarctic; and Dr Caroline West looks at a development that is changing sheet music which has been around for centuries.