Groomed for disaster
Neighbours star Scott Michaelson (pictured) is enjoying the emotional challenges coming up for his character Brad Willis, but is not so sure about his character’s choices — in particular having an affair with Lauren (Sarah Vandenbergh) just prior to his wedding to Beth (Natalie Imbruglia, pictured).  “I would never do what Brad has done,” he told TV Week.  “I think it’s pretty cruel.  I mean, it doesn’t get much worse, does it?  I don’t take any of it personally but I do get embarrassed by Brad.  Some of the things he is doing, I disagree with them totally.  But I still love playing him.”

Aaron’s amazing attitude
It could be easy to be resentful after your family has abandoned you, but for Attitude reporter Aaron Pedersen it was the turning point to a more positive life.  One of seven children, with no father around, it was a difficult life as his mother would move the family from one town to another.  “I’ve lived all over… Port Augusta, Broken Hill, everywhere. Mum loved moving,” he said.  One day, at the age of 13, he returned home one day to find the house cleaned out.  “They had just got up and left me.  I look back on it now and it’s quite funny.”  The homeless teenager ended up with a foster family, a more stable environment that enabled him to concentrate on his studies — leading to him being chosen for the ABC‘s Aboriginal cadetship scheme.  He worked for three years at the ABC newsroom in Melbourne before being picked up by Attitude.  After Attitude finishes its current series Pedersen will take up a new role for ABC’s Blackout series.  “Blackout will give me the opportunity to paint some positive pictures about Aborigines, and I hope that will have a positive effect in the community.”

Rachael to quit
Hey Dad! star Rachael Beck is planning to quit the long-running sitcom in July, although her contract won’t have expired.  The young actress will be taking her one-woman stage show Young Judy: An Interview, based on Judy Garland, to Melbourne when Hey Dad! goes in a production break in July, and is seeking to negotiate out of her contract.  Hey Dad! producers deny any suggestion that Beck is planning to leave.  “Yes, there is a production break when Rachael plans to take her live show to Melbourne, but we haven’t heard any talk of her leaving for good,” a spokesperson told TV Week.

“By 1988, Degrassi Junior High was being shown in more than 40 countries and the following year the students all moved up to senior school and the show dropped the “Junior” from its title.  Degrassi High has been screening off and on in Australia on the ABC as part of Michael Tunn‘s The Afternoon Show and, while its ratings at 5.30pm have hardly had the commercial networks scratching for an answer, I know from the mail we receive here that Degrassi High has certainly struck a chord with a certain demographic.  On Friday, in the prime time slot of 8.30pm, the ABC will screen School’s Out — The Degrassi Feature, a movie which wraps up the school days of the show’s regular characters.”

Monday:  In A Country Practice (7.30pm, Seven), Terence (Shane Porteous) fears for Harry’s (Andrew Blackman) life as the car accident has left him with a collapsed lung and a badly injured hand which could threaten his future career as a surgeon.  Ken Sutcliffe hosts the Rugby League State Of Origin, New South Wales versus Queensland (8.30pm, Nine), from the Sydney Football Stadium. 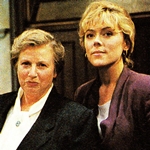 Tuesday:  Kerry Armstrong makes her debut appearance in All Together Now (8pm, Nine) as the mother of twins Thomas (Steven Jacobs) and Anna (Jane Hall) who was thought to have died.  Moya O’Sullivan guest stars in GP (8.30pm, ABC).  Former A Country Practice and E Street star Joan Sydney (pictured with Lisa Hensley) guest stars as magistrate Hilda Danforth in Law Of The Land (9.30pm, Nine).

Thursday:  In the final episode of E Street (7.30pm, Ten), it is two months since the fire in Patchett’s Pub; Jojo (Kelley Abbey) has her own cafe; Bonnie (Melissa Bell) has had a relapse and is now in a coma and Laura’s (Antionette Byron) younger sister has turned up unexpectedly. Maggie Tabberer and Richard Zachariah host the series return of The Home Show (8pm, ABC).

Friday:  The One Day International (8.30pm, Nine) moves to Edgebaston for the second of three one day matches between England and Australia.

Saturday:  In Beyond 2000 (7.30pm, Seven), Amanda Keller goes parachuting after she is taught how to control a parachute with the new simulator designed to reduce injuries; and Tracey Curro discovers a fleet of trucks using fuel made from recycled telephone books.