Heaven can wait!
ABC has decided to put on hold plans to produce a local adaptation of the BBC series Waiting For God.  The series, to star Ruth Cracknell, was due to begin production in April.  Putting the project on hold has now made it possible for ABC to proceed with production of the sixth series of Mother And Son, starring Cracknell and Garry McDonald, which is now set to air in 1994 instead of 1995 as originally planned. 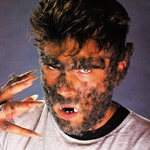 Werewolf of Westside
Despite cast outrage over plans for a bizarre werewolf storyline, E Street producers are pressing ahead.   The story sees Constable Max (Bruce Samazan, pictured) turn into the horror creature and terrorise Westside.  “When the concept was first proposed, I thought, ‘Hang on, what’s going on here?’,” Samazan told TV Week.  “But I found out the storyline was in the spirit of fun, so that was okay.”

Garry Shelley: The View From Here: 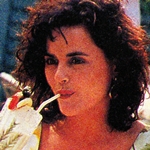 “The cardinal sin of Seven Deadly Sins is there is not one likeable character in the whole shebang.  The writers obviously believe that nice people don’t sin.  Take it from me, they do.  To be fair, Seven Deadly Sins has some of the best acting you’ll see in a long while.  There’s a tour de force from Victoria Longley as a walking blotter, squelchy with gin.  With a hair-don’t rather than a hair-do that could have been styled by Stevie Wonder, she looks like a moody old funnel web ready to pounce.  In (episode) Sloth, Robyn Nevin is a delight as a visitor to a health farm where she meets up with her ex-husband and his new, younger wife.  Robyn will probably jolt your great-grandmother out of her rocking chair with her opening line.  You’ll enjoy Elizabeth Alexander as an actress of great talent in Pride.  And what Gia Carides (pictured) is doing in Gluttony… may it never happen on the dance floor!”

Program Highlights (Melbourne, February 21-27):
Sunday:  Sunday night movies are 3 Men And A Little Lady (Seven) and Indiana Jones And The Last Crusade (Ten) up against the first part of mini-series Diana: Her True Story (Ten). 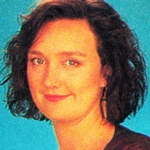 Wednesday:  In Neighbours (6.30pm, Ten), Doug (Terence Donovan) discovers the shocking truth about his father’s (Charles ‘Bud’ Tingwell) illness, while Rick’s (Dan Falzon) clever scheme to get him out of the family trip to Italy backfires.  Seven crosses to Waverley Park, Melbourne for the Foster’s Cup (8.30pm) featuring North Melbourne versus Adelaide.  In Pride, the second episode of Seven Deadly Sins (9.30pm, ABC), Jill and Roger (Liz Alexander and Colin Friels) are a successful theatre team whose 20-year marriage is threatened when they are invited to host a presentation to a class of acting students.

Thursday:  In RFDS (7.30pm, Nine), Leanne (Lydia Miller), the radio operator at the RFDS base, is harassed by her ex-boyfriend Cowboy (Julian Branagan).  His behaviour reaches the point where something must be done.  Seven has a delayed coverage of the 35th annual Grammy Awards (8.30pm) from the Shrine Auditorium, Los Angeles.  Adults-only magazine program Sex (9.30pm, Nine) returns with a new series.  Robyn Nevin, Frank Gallacher and Vince Colosimo star in Sloth, the third episode of Seven Deadly Sins (9.30pm, ABC).