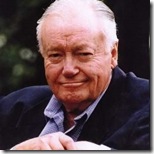 Australia has lost one of the legends of the showbusiness world with the passing of actor Charles ‘Bud’ Tingwell at the age of 86 after complications with prostate cancer.

Born in Sydney, Tingwell’s first job was as an announcer at radio station 2CH.  In 1941 he joined the Royal Australian Air Force and served in World War II.  Upon returning to Australia he married girlfriend Audrey Wilson and ventured into an acting career that would continue for the rest of his life – taking in film, radio and stage productions and later television.

After seventeen years working in the United Kingdom – where he starred in many TV and film roles but not least being a voice artist for the ‘Supermarionation’ sci-fi series The Thunderbirds – Tingwell and his family returned to Australia in 1973 when producer Hector Crawford signed him up for a leading role in the long-running series Homicide.

After Homicide, Tingwell stayed with Crawford Productions as a director for other series including The Box, The Sullivans, Cop Shop, Skyways, Holiday Island, Carson’s Law and the mini-series The Flying Doctors.   He featured in just about every other major drama series on Australian TV – Prisoner, Neighbours, Zoo Family, A Country Practice, GP, The Flying Doctors, Bellbird, Blue Heelers, All Saints, Round The Twist, Changi, Something In The Air and The Secret Life Of Us, just to name a few.

As well as drama, Tingwell’s career also had a lighter side, appearing as “Gramps” in the “Charlie The Wonderdog” series of comedy sketches for ABC’s The Late Show, as a judge in Mother And Son and as a lawyer in the modern-day suburban classic The Castle.

In 1994, Tingwell was inducted into the TV Week Logie Awards’ Hall of Fame and in 1999 received an Order of Australia medal in the Queen’s Birthday Honours list.

One of his last TV roles was as British prime minister Winston Churchill in the ABC telemovie Menzies And Churchill At War.

Charles ‘Bud’ Tingwell is survived by son Christopher and daughter Virginia.  Wife Audrey passed away in 1996.