Who’s who in the media zoo Georgie joins Acropolis Now!
Former A Country Practice star Georgie Parker has made the surprising move of joining the cast of Seven‘s comedy series Acropolis Now.  The dual TV Week Silver Logie winner will play the character of airline stewardess Despina Hatzipapadopoulos, an old flame of Memo (George Kapiniaris).  The Seven Network has given the go-ahead for a fifth series of the sitcom, with production due to start early next month.  Parker is set to appear in at least nine of the 13 planned episodes.  Her new comedy role comes after recent guest appearances in All Together Now and ABC drama GP.

Sophie turned off by Sex
Despite the ratings success of Nine‘s new adults-only magazine show Sex, host Sophie Lee has not been impressed with how the series has been progressing and is said to be keen to disassociate herself from the show.  Lee initially agreed to host the six-episode series (it has since been extended to ten) on the condition that the show’s content remained serious and not titillating. She is now cutting back on the location filming for story links and is now spending only one day a week taping segments in the studio.  As well as Sex, Lee continues to fulfil her commitments to Nine’s drama series The Flying Doctors. 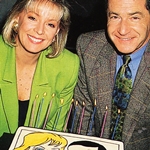 Briefly…
Today hosts Steve Liebmann and Elizabeth Hayes (pictured) have celebrated the show’s tenth anniversary.  Liebmann was with the show when it debuted in 1982 but left in 1986 for a stint at the Ten Network before returning in 1990.  “It has been rewarding financially, and egotistically, and winning (the ratings against Good Morning Australia) makes it all the better,” he told TV Week.

Healthy Wealthy And Wise producer Gavan Disney is furious that former Good Morning Australia host Kerri-Anne Kennerley has been telling media that she will be filing reports for the lifestyle show at the suggestion of Network Ten chief Gary Rice.  “Ten asked me if I was interested in her joining the show and I said I would think about it, and then decided it wasn’t appropriate,” Disney told TV Week.  “Gary Rice can’t offer her a job on my show and she’s obviously touting for business.”  Kennerley’s contract with Ten expired back in May but she tells TV Week that Rice wants her to stay at the network.  “We plan to make an announcement about her new role shortly,” network executive Alan Bateman said.

Actor Peter O’Brien is returning to Australia after four years in the UK with a guest role in murder mystery game show Cluedo.  O’Brien may shock fans with his upcoming role as a heavy-metal guitarist, a far cry from his squeaky-clean roles in Neighbours and The Flying Doctors.  “I had a gut feeling it was time to come back to Australia to re-establish a profile,” he told TV Week.  “I couldn’t think of a better way to do that than a role like this.” 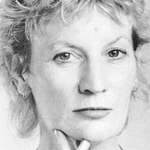 Home And Away‘s Cornelia Frances seems to have lost her reputation as the show’s resident nasty with the arrival of Irene Roberts (played by Jacqy Phillips, pictured).  The mother of Fin (Tina Thomsen) and Damien (Matt Doran), Irene is rude, abusive, insensitive, bloody minded and devoid of charisma.  “Perfect strangers come up and say, ‘Oh you’re that really rotten bitch from Home And Away‘,” she told TV Week.  Although Phillips will exit the show for a theatre role in Sydney next month, she is expected to return to Home And Away.  “It’s an open-ended thing,” she said. 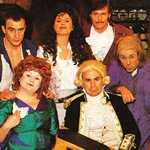 Lawrie Masterson: The View From Here
“William Bligh, ill-fated captain of the HMS Bounty and one-time Governor of New South Wales, did not have an auspicious time in public life.  And, unfortunately, the new sitcom Bligh, loosely based on his unhappy time, similarly might suffer problems endearing itself to the masses.  The series joins the Seven Network‘s Thursday line-up from 25 June and, while it is premature to sentence it to walk the plank on the evidence of the first two episodes, it is, frankly, disappointing.  Initially, what it delivers is uneven and not notable for the originality which the Fast Forward team injected when it arrived on the Australian television comedy scene.”

Monday:  Nine launches two weeks of coverage of the Wimbledon tennis championships, starting each night from around 11.00pm and continuing through to 4.00am. 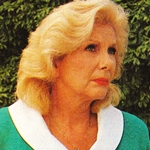 Tuesday:  In Neighbours (Ten), Madge (Anne Charleston, pictured) is disgusted when she discovers that Lou (Tom Oliver) has taken her on a holiday to a health resort that turns out to be a nudist colony.  In Beyond 2000 (Seven), Simon Reeve looks at the latest breakthrough in the search to cure autism, and Tracey Curro meets the unborn children of the future.

Thursday:  In Nine’s travel show Getaway, Anna McMahon holidays on Fraser Island, David Reyne visits Warburton Health Farm in Victoria, and Rebecca Harris learns to sail in Pittwater, NSW.  In Embassy (ABC), the scent of oil wealth in Ragaan has seen the Americans intent on re-establishing their embassy in the country.

Saturday:  SBS crosses to Gothenburg, Sweden at 3.45am for live coverage of the final of the Euro ’92 soccer championship.  The match coverage is replayed at the more civilised time of 4.45pm and again from 10.05pm.