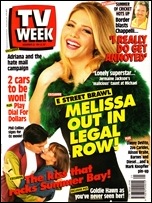 Melissa’s shock exit!
E Street star Melissa Tkautz has made a sudden exit from the Network Ten soap, halfway through a three-year contract, after an apparent rift developed between herself and the show’s producers.  It is not known exactly what problems have arisen although it is suspected that Tkautz’s pop star commitments – such as preparing to tour with C&C Music Factory next month – have conflicted with her filming commitments to the series.  Producer Forrest Redlich told TV Week that “the official line is, ‘She’s leaving to pursue musical interests’.”  He also said that Tkautz’s pop career almost came about by accident as the pop songs were intended to promote the show and Tkautz was chosen from the show’s cast as the best match for the proposed first single, Read My Lips (“I thought it was too raunchy for Toni Pearen and too teeny-bopper for Alyssa-Jane Cook.”)  The debut single hit the top of the charts as did the follow up single, Sexy (Is The Word), and suddenly Tkautz has become a big pop star.  “She was a successful marketing exercise for us,” Redlich said.  “I don’t know if this will hurt the show.  She had fans.”  Tkautz’s sudden departure will see her character Nikki sent off to New Zealand.

New series woos John
John Waters is tipped for the lead role in a new weekly drama series to be filmed in Brisbane next year.  The new series, Darling And Partners, is to be set in a law firm and according to producer Phillip Bowman is hoped to demystify the process of law.  “It is not an expose of the Australian legal system,” Bowman told TV Week.  “Lawyers I have spoken to see this series as having positive potential.”  The pilot for Darling And Partners will begin filming early in 1992. 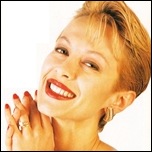 ‘The worst year of my life…’
For Wheel Of Fortune’s Adriana Xenides it has been a traumatic year, with an increase in work commitments, being plagued by illness for months, and the breakdown of her two-year marriage.  She also became the target of a hate-mail campaign where an anonymous writer had contacted many media outlets, including TV Week, with some very personal details and her personal telephone number.  “Initially it hurt, but that didn’t last very long,” she told TV Week.  “When I thought about it, I felt very sorry for whoever took the time to write a note like that to the press.  I feel whoever did that must be a lonely person or terribly bored.”  Apart from the marriage breakdown, she was hit by a “mystery” illness which turned out to be a combination of glandular fever and viral pneumonia.  “I’ve had the worst year of my life with sickness,” she said.  “I usually have the odd cold or whatever, but I’ve never been this sick.”  The year has ended on a highlight, however, with her visit to Disney World as part of the international 20th anniversary celebration of Wheel Of Fortune. 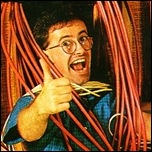 Live And Sweaty host Andrew Denton is to start work soon on a pilot for a proposed interview series for ABC.  With the working title One On One, it will feature Denton interviewing a single guest.  “(One On One) will either be one of the greatest moments in modern television or a complete failure,” he told TV Week.  Production is due to start next month.

Home And Away is set to end the year where the sudden return of Frank (Alex Papps) after the collapse of his marriage to Roo (Justine Clarke) sees him make a beeline for former wife Bobby (Nicolle Dickson), claiming that he is sorry that he divorced her and is still in love with her. 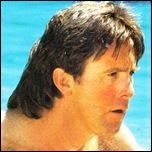 Fast Forward stars Glenn Robbins and Michael Veitch have been criticised for glamorising alcohol use with their “yuppie drunk” characters that appear in the sketch comedy show.  ABC’s Media Watch and the spokesman for the Drug Offensive campaign have slammed the sketches as trivialising alcohol abuse.  But Robbins has defended the sketches.  ”The drink gives them the confidence to say the things they want to say.  They are ‘blokes’ and they find it hard to do this otherwise.  It’s tragic that they need alcohol to be able to say these things,” he said.  “So we don’t believe it’s glamorising alcohol use at all… it’s showing the reality of a bad situation.”  Veitch also notes that it is significant that their characters fail in their romantic pursuits as a result of drinking.  “It’s obvious they are not attractive people,” he said.  “They talk to girls but they never get any.  They lead pretty sad lives.” 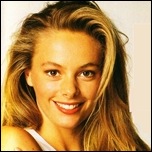 Alison Brahe, the host of Nine’s upcoming children’s quiz show Guess What?, has no intention of using her married name after she marries actor Cameron Daddo next month.  “We will have Seven, Nine and Ten covered by the Daddos so I’m just going to stick to Brahe,” she told TV Week.  “I don’t think television is ready for another Daddo just yet.”  Production on Guess What?, which will also feature Hey Hey It’s Saturday cartoonist Andrew Fyfe, will commence at the studios of NWS9 in Adelaide in January.

John Laws says…
”After the coarse humour of Married… With Children, the bitchery of The Golden Girls and the cloying cuteness of The Cosby Show, the consistent freshness and vitality of Australia’s Hey Dad! comes as a welcome relief.  So it’s nice to know that as the TV year grinds to a conclusion – leaving behind the usual clutch of falling stars and ratings bombs – Hey Dad! is comfortably maintaining its bright and appealing honest approach.”

Sunday:  The beginning of the final week of official ratings surveys for the year sees the final editions of Wide World Of Sports (Nine), Sports Sunday (Nine) and 60 Minutes (Nine) for 1991.  Sunday night movies are The Presidio (Seven), National Lampoon’s Christmas Vacation (Nine) and Out Of Africa (Ten) – while ABC presents the Australian Opera production of Puccini’s last opera, Turandot.

Tuesday:  In the season final of A Country Practice (Seven), romance is in the air after Darcy (Kym Wilson) and Luke (Matt Day) get their HSC results.  And in the series final of All Together Now (Nine), while planning a traditional Christmas celebration the Rivers household is visited by a very pregnant woman and her husband (played by Maryanne Fahey and husband Ian McFadyen) on Christmas Eve who are stranded with no accommodation – a coincidence not lost on Bobby (Jon English).  The episode also features a guest appearance by Robert Grubb (The Flying Doctors).

Wednesday:  In the lead up to World AIDS Day, Ita Buttrose introduces the US special Common Threads – Stories From The Quilt (ABC), the story of five people who have died from AIDS.  Their names have been commemorated in five panels of an ever-growing quilt that now covers 14 acres.

Thursday:  Seven begins four days of coverage of the Australian Open golf, with commentators Sandy Roberts, Jack Newton and Pat Welsh.  Nine’s Midday With Ray Martin presents its final episode for 1991 with a two-hour special.  In The Flying Doctors (Nine), a bus load of Japanese tourists arrive in Coopers Crossing and the locals’ reaction varies from enthusiastic to racist.

Friday:  Nine’s daytime is dominated by the first day of the cricket First Test between Australia and India, live from the Gabba in Brisbane.  In the evening, Burke’s Backyard (Nine) presents its final edition for 1991.  Ten debuts US youth drama Beverly Hills 90210.