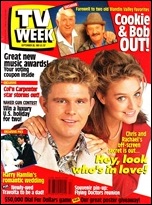 Hey, look who’s in love!
While Chris Mayer and Rachael Beck (pictured) are constantly bickering as their Hey Dad! alter egos Simon and Sam, off-screen the two have been secretly dating.  “Yes, I am in love,” Mayer told TV Week.  “It feels great.  I’m really enjoying it.”  During an upcoming production break for the series, he intends to head to Italy, staying in the town of Perugia and studying Italian – and it looks like Beck will be joining him.

It’s goodbye Bob and Cookie!
As the Seven Network’s A Country Practice approaches its tenth anniversary, some drastic cast changes are set to shock fans of the popular drama.  Actors Gordon Piper and Syd Heylen, who play characters Bob Hatfield and Cookie, are not having their contracts renewed at the end of the year, both having worked on the show for much of its ten year run.  Producer James Davern has said that the actors have other commitments – Piper is producing corporate videos and Heylen also runs a marketing company and is keen to spend time in Queensland with his wife who isn’t well – and that the characters will not be written out in any “Wandin Valley massacre” storyline and will be able to return at a later stage.  However, TV Week reports that neither actor had any option to stay on the show.  Also leaving the series is Matt Day, who will tape his final scenes in December, and Georgie Parker and John Tarrant, who will finish up early in the new year.  All three have decided it is time to move on.  To fill the void left by losing five characters some new additions will be signed on.  Former Brides Of Christ star Kym Wilson has joined the series and will make her on screen debut in November, and three other new characters will be written in over the coming months but have yet to be cast.

Stig cops right out!
Col’n Carpenter star Stig Wemyss has left the Network Ten series after a falling out with the show’s producers.  Wemyss, who has played the role of Colin’s flatmate Michael Preeble since the show started 18 months ago, has told TV Week that he is “extremely disappointed” that an agreement with producers could not be reached.  “I wanted the storylines to explore a bit more of Michael.  I didn’t think that was too much to ask because the character had been there so long.  I’m not saying I wanted it to be the Michael Preeble show or to be any less about Colin (Kim Gyngell), but if you don’t expand a character, he just becomes nothing.  For me, the strength of the show was having an ensemble cast.  It was obvious Michael wasn’t going to be playing a major part in the way the show was going, so I didn’t want to continue.” 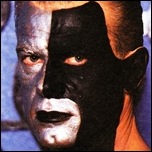 Briefly…
Just months after the bomb-blast storyline that killed off three characters, the neighbourhood of Network Ten’s E Street is about to be stalked by a psychopathic serial killer.  Architect Steven Richardson, played by Vince Martin, is set to reveal a darker side as he takes on the identity of ‘Mr Bad’ (pictured) whose first victim is Dr Virginia Travers (Julieanne Newbould).  Producer Forrest Redlich has defended the frightening storyline (“Where A Country Practice and GP do things on alcoholism, venereal diseases and such social subjects, we chose the serial killer.  Unfortunately they do exist.”) and a spokesperson for Ten has said that the network is mindful of the show’s 7.30pm timeslot and all episodes in question have to be approved at multiple levels within the network before being submitted for final approval by the Australian Broadcasting Tribunal. 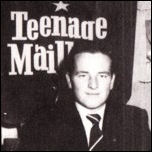 Ernie Sigley, co-host of the Nine Network’s In Melbourne Today and In Sydney Today programs, talks to TV Week about his upcoming 40th anniversary in showbusiness.  Starting in radio as a teenager, at Melbourne station 3DB, Sigley made the move to television as a performer on HSV7’s Teenage Mailbox (pictured) and went on to a successful television career including several years as host of Adelaide Tonight and later The Ernie Sigley Show, The Penthouse Club (later Saturday Night Live), Pot Luck and Wheel Of Fortune.  The one-time Gold Logie winner also mentions the reported altercation with Don Lane at the after party for the 1988 TV Week Logie Awards.  “I didn’t say anything to him to upset him.  The relationship had been strained for a few years,” he said.

When boxing champion Lionel Rose was told of plans to make a mini-series about his life, he wasn’t enthusiastic.  He told producers nobody would want to see his life story.  “I told them I was unreliable and they couldn’t depend on me to help them out,” Rose told TV Week.  “But they kept at me until I agreed.  I told them I wanted the whole story to be told… warts and all.”  However, TV Week production editor Frank Quill, who also happens to be a member of the World Boxing Council’s executive and considered Australia’s most senior professional boxing official, says that despite Rose’s request that his portrayal be “warts and all”, viewers may be short-changed by viewing the final product.  “Certainly, some viewers, human enough to think everything in Odds actually happened, will be misled,” he wrote.  Rose Against The Odds, which stars newcomer Paul Williams as Rose and former The Flying Doctors star Vikki Blanche as his wife Jenny, screens this week on the Seven Network.  The two-part mini-series also stars Kris McQuade, Tony Barry and Hollywood actor Telly Savalas.

Former A Country Practice star Sophie Heathcote has won a role in Yahoo Serious’ upcoming movie project, a contemporary comedy about Ned Kelly.  “The character I play is really young and silly and very funny,” she told TV Week.  “She is in love with Ned and I am going to have a ball playing her.”

John Laws says…
”There can often be something ghoulish about screening the “final” TV interviews of prominent people, those unfortunate enough to die suddenly soon after such interviews are given.  We have had the “final interview” with Dr Victor Chang, the brilliant heart surgeon shot dead in a Sydney street in early July.  Happily, SBS’ King Of Hearts documentary managed to avoid any overt sense of ghoulishness in giving us a nicely balanced portrait of Dr Chang.  This was, it has to be admitted, the most emotionally-draining documentary you are likely to see in a long time – not because of any exploitative intention on the part of reporter Amanda Hickey, but because of the simple, profoundly moving tributes paid to Chang by his friends, patients and colleagues.  This was a wonderful piece of TV documentary work.  It probably would have turned out a completely different product had Dr Chang still been alive, because Hickey began working on it a few weeks before his death.  Dr Chang was slain only six weeks after talking to SBS.  I have a feeling that public response to the Dr Chang documentary will lead to a speedy re-screening.  It pointed up only too bleakly how the circumstances of his death resulted in such endless waste.”

Program Highlights (Melbourne, September 28-October 4):
Saturday:  It’s Grand Final day for the AFL.  Seven’s coverage, started late last night with the Football Marathon, continues through the day – with the traditional North Melbourne Football Club Grand Final Breakfast at 8.00am, followed by live coverage of the Under 19s and Reserves grand finals.  Then at 2.00pm live coverage from AFL Park, Waverley, for the end of season clash between Hawthorn and the West Coast Eagles.  Daryl Braithwaite – the key performer at the pre-game entertainment at the Grand Final – will also appear on Nine’s Hey Hey It’s Saturday in the evening. 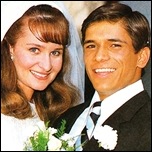 Sunday:  Seven presents the first instalment of the two-part mini-series Rose Against The Odds (pictured), telling the story of boxing champion Lionel Rose who captured the world’s attention when he defied the odds to become the World Bantamweight champion as a 19-year old in the 1960s.  Sunday night movies are The Karate Kid II (Nine) and The Abyss (Ten).

Monday:  The conclusion to Rose Against The Odds (Seven) sees Lionel Rose’s sporting career at an end and his entering the seedy world of small-time crime and drug abuse, and the battle to get his life back on track.

Tuesday:  In A Country Practice (Seven), Lucy (Georgie Parker) is shattered when the results of her IVF program come back.  In Chances (Nine), Alex (Jeremy Sims) stuns the family when he re-appears after they had believed he had perished in a plane crash, and Paris (Annie Jones) is devastated when she learns a close friend has AIDS.

Thursday:  Ernie Dingo guest starts in The Flying Doctors (Nine) as a university dropout who clashes violently with his brother (Luke Carroll) and Dr Guy Reid (David Reyne) over the pending death of his grandfather.  ABC’s coverage of the 1991 Rugby World Cup, being held in France and the United Kingdom, begins with late-night coverage of the opening ceremony and the first match between England and New Zealand.

Friday:  In Home And Away (Seven), Sam (Ryan Clark) finds out who his father is.  ABC’s coverage of the Rugby World Cup continues with the match between Australia and Argentina.