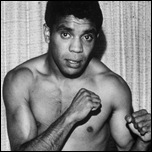 Australian boxing legend Lionel Rose MBE died yesterday at his Warragul home at the age of 62.

He was also a key figure in one of Australian television’s significant events of the late 1960s. 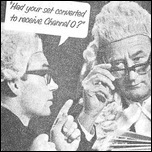 Melbourne’s third commercial channel, ATV0, had struggled to gain a significant hold of the market since its debut in 1964.  The major stumbling block was that older TV sets and antennas were not compatible with the Channel 0 frequency.  Even if households had converted their older TV sets to accommodate the 0 frequency, as many did prior to the launch of ATV0, their antennas might also have needed modification or replacement.

In a bid to address this issue of reception, station owner Reg Ansett, noting the popularity of boxing with Australians and the intense public interest in Rose, planned to stage a world title fight, to be held in Melbourne and telecast live on ATV0, between Rose and British champion Alan Rudkin. 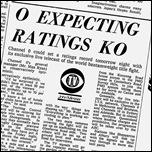 The event was said to have cost Ansett around $140,000 (in 1969 dollars) – including $70,000 to sign up Rose – but the channel was confident that it would deliver a result.  “I’d be surprised if we didn’t have at least 50 per cent of the viewers… and probably up to 70 per cent,” station manager Max Ryan told The Age on the eve of the event.

The fight took place at Melbourne’s Kooyong tennis stadium on the night of Saturday, 8 March 1969.  The event attracted widespread media coverage, with four Melbourne radio stations also covering the fight, and national broadcaster ABC presenting a preview of the event the night before.  The BBC were also to provide live radio coverage of the fight, with a videotape recording of the bout to be sent back to the UK for local transmission.

Nationwide interest in the fight saw even a rugby game in Sydney moved from Saturday to Friday night to avoid a clash. 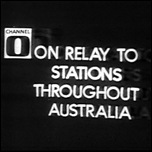 ATV0’s coverage started with the weigh-in at 11.00am on the Saturday.  Then at 8.00pm all eyes were on Kooyong.  ATV0’s evening coverage, headed by sports director Phil Gibbs (pictured, below, with Rose) with commentators Jim Shepherd and Rocky Gattellari, was being beamed direct for live transmission across the 0-10 Network and to regional stations across Australia.  It was also being broadcast via ABC in some remote and regional areas.

The channel had six cameras set up at Kooyong to cover the fight, as well as a roving camera powered by a “back pack”.

The night’s program started with lightweight and middleweight bouts.  And then, the big one – a 15-round world bantamweight championship bout between Rose and Rudkin. 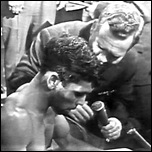 The telecast was due to close at 11.00pm, including post-fight interviews with the opponents and the trophy presentation by Victorian Premier Sir Henry Bolte, with ATV0 scheduling a repeat the following afternoon.

The gamble taken by Ansett reaped a massive result.  The telecast made Australian television history by scoring a rating of 67, that is 67 per cent of all households.  At a time when anything above a rating of 30 was considered successful in a four-station market, it was a massive result and significant for a channel that up until then had struggled to get a decent audience.  It would appear that the channel’s reception dilemma was over, though it would still be a couple more years before the channel scored any consistent ratings success.

The ratings record set by the Rose-Rudkin fight would stand for another three decades before being broken by the Seven Network’s telecast of the opening ceremony of the Sydney Olympic Games in 2000.

The life of Lionel Rose was also enacted in a television mini-series, Rose Against The Odds, which aired on the Seven Network in the early 1990s.

Permanent link to this article: https://televisionau.com/2011/05/boxer-was-a-tv-record-breaker.html