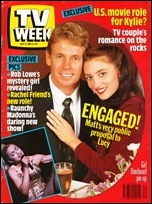 Love is on the air!
The frustrated relationship between nurse Lucy Gardiner (Georgie Parker) and Wandin Valley vet Matt Tyler (John Tarrant) takes a new turn when, in episodes to air this week, Tyler decides to propose marriage when presenting his “Valley Vet” radio show.  But, despite the engagement, marriage for the pair (pictured) is still a long way off.  “There are more twists and turns,” Parker told TV Week.

Skippy bounces back
The legendary children’s series Skippy The Bush Kangaroo is about to make a comeback in a new series for the Nine Network.  Nine’s drama chief Alan Bateman says that the new Skippy will be more in tune with the modern-day concerns for the environment.  “Skippy in this generation is going to be very environmentally aware.  The storylines will focus on genuine environmental issues such as preserving our native forests, land degradation and protecting endangered species,” Bateman told TV Week. 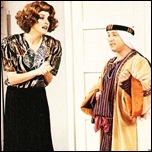 Soapie saga stumbles on!
While Nine’s evening soap Family And Friends is struggling to find an audience a far less likely ‘drama’ is giving the network a ratings spike.  A Town Like Dallas, created as a send-up of daytime soaps and, in particular, the Seven Network’s daytime drama The Power The Passion, is a weekly segment on Midday With Ray Martin and has become a hit with viewers.  The mock soap opera, featuring in the show’s last quarter hour each Friday, has clocked up 50 episodes with guest stars including John Mangos, Don Burke, Glenn Shorrock, Geoff Harvey, Queenie Ashton, Angry Anderson, Yahoo Serious and US actors Emma Samms and Thaao Penghlis appearing alongside segment regulars Gretel Killeen, David Argue, Ross Daniels and Shane Bourne and the show’s host, Ray Martin.  Within a few weeks of its launch, A Town Like Dallas was getting ratings of 17, a huge ratings figure for a daytime timeslot, and The Power The Passion was rating two.

Kate’s a class act!
It’s hard work being a child on a TV series – that’s the verdict from 11-year-old Kate Ritchie who has played orphan Sally Keating in Home And Away for the last three years.  “Sometimes I wish I could just be at school,” she says.  “It’s very hard work, but I do enjoy being on Home And Away very much.  I’m so fortunate to be doing what I do.”  Ritchie names Tracy Mann and Nicole Kidman as her favourite actors.  “I worked with Tracy on the mini-series Cyclone Tracy.  I was the little girl who got sucked out of the bathroom!”  But despite her years in showbusiness, Ritchie is thinking of other pursuits for the future.  “I want to be an architect.  I also hope to keep acting.” 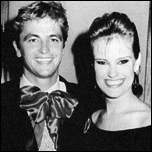 Briefly…
Former Neighbours co-stars Peter O’Brien and Elaine Smith have called an end to their four-year relationship.  The split is said to be amicable, caused largely by the actors working apart – with O’Brien spending a lot of time in the UK and Smith commuting back and forth.

After a “disappointingly quiet” couple of years, actor Andrew Clarke is returning to TV in a guest appearance on the US series Mission: Impossible, being filmed in Australia.  Clarke is also currently working on a children’s series, The Girl From Tomorrow, for the Nine Network.

The somewhat touchy topic of hair loss is being tackled on Seven’s comedy series Hey Dad! – with Simon Kelly (Chris Mayer) contemplating a bald future after sister Debbie (Simone Buchanan) plays a prank to make him think he is losing his hair. 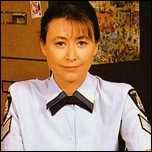 John Laws says…
”At time of writing, my viewing of Skirts (starring Tracy Mann, pictured) has been limited to the opening two-hour telemovie – but it was more than enough to convince me that the Simpson Le Mesurier production house has come up with the most significant Australian TV drama series in years.  All it needs is to avoid slipping into the Cop Shop “soapie” mould and it can become a long-distance runner in the ratings game.”

Program Highlights (May 5-11):
Saturday:  HSV7 presents the 1959 four-hour movie epic, Ben Hur, starring Charlton Heston.
Sunday:  Sunday night movies are Once Upon A Texas Train (HSV7), The Holcroft Covenant (GTV9) and Colors (ATV10).  ABC presents the debut of a new documentary series, Hindsights, hosted by Geraldine Doogue and Chris Masters.  And SBS presents its annual telecast of the Eurovision Song Contest, this year being held in Zagreb, Yugoslavia, with 22 countries competing for the right to host the event next year.
Monday:  In A Country Practice (HSV7), Bob Hatfield (Gordon Piper) fights for his life after a bee sting.  And Luke (Matt Day) and Shirley (Lorrae Desmond) visit Father Moore’s refuge in Sydney.
Tuesday:  Andrew Clarke and Patrick Ward are guest stars in this week’s episode of Mission: Impossible (GTV9).
Wednesday:  ABC presents a one-hour special, Tales Of Helpmann, a profile of Sir Robert Helpmann, one of the theatre world’s most controversial, outspoken and flamboyant identities.  ATV10 presents a late-night delayed telecast of the Rugby League State Of Origin from the Sydney Football Stadium.
Thursday:  SBS makes an early-morning (4.00am) cross to Sweden for the final of the European Cup Winners Cup.  For those that are not early-risers, SBS repeats the match at 10.25pm.