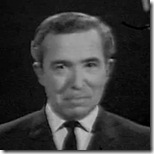 Of the names remembered in our last post of 2009 there was one name that has only now come to our attention – actor Brian James, who passed away late last year at the age of 91.

A former schoolteacher, James served in the Navy for six years before making his professional acting debut in the production of Noel Coward’s Present Laughter, at the Princess Theatre, in 1948.  After touring Australia with the production he went to London, studying drama and also appearing at the West End in the naval comedy Seagulls Over Sorrento – a production that he would also appear in on stage upon his return to Australia.

By the late-1950s, James had made the transition to television, with the lead role in the GTV9 series Emergency, followed by HSV7’s live-to-air performance of Seagulls Over Sorrento, reprising his former stage role.

In the early ‘60s, James had scored the lead role of Captain Bligh in the ABC historical series Stormy Petrel, a role which won him a TV Week Logie for best actor in 1961.  He then appeared in the courtroom drama Consider Your Verdict and played the title role in the Seven Network’s Jonah.

On 1 August 1964, he appeared (pictured) in the TV special This Is It!, commemorating the official opening of Melbourne’s third commercial television channel, ATV0, from studios based in the suburb of Nunawading.

With roles in dozens of stage productions and in TV series including Bellbird, Motel, Solo One and Young Ramsay, James continued to be a familiar name on both stage and television throughout the 1970s, ending the decade as the bumbling airport administration officer George Tippett in the Seven Network’s Skyways – a role that scored him a Penguin Award.

During the ‘80s he reprised the role of George Tippett in Holiday Island, guest starred in Carson’s Law, appeared as prison warden Stan Dobson in Prisoner and swept neighbourhood gossip Nell Mangel (Vivean Gray) off her feet in Neighbours – all productions based in the same Nunawading studios where he appeared on opening night of ATV0 in 1964.

His last credited TV role was in the ABC series Something In The Air.

Brian James is survived by his niece Julie and nephews Phillip, Michael and Brian.  His cousin Gerald Mayhead had written a tribute to Brian James for The Age, including his extensive stage and film career.