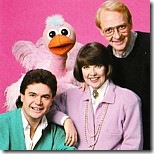 Almost a decade after its demise, Hey Hey It’s Saturday is set to come back – at this stage in the form of two reunion specials to air on the Nine Network later this year.

If the specials rate well then it may trigger negotiations for a revived ongoing series.

Daryl Somers, who hosted HHIS for its entire 28 year run and in later years also produced the show, has been eager to see the program returned to screens and there have on-again off-again rumours about the show’s return for some years.

There was also a possibility in recent years that Somers’ connection to Seven as host of Dancing With The Stars could have seen HHIS revived on that network.  In 2006, Somers staged a mini-reunion of HHIS cast members as part of the Melbourne-based Royal Children’s Hospital Good Friday Appeal.

It is not known how many HHIS former cast members would be involved in the reunion specials or any future series.  The reunion specials are also not expected to air on Saturdays with reports that they may go to air on Tuesday in an attempt to dent the popularity of Seven’s factual titles and drama Packed To The Rafters and Ten’s new game show hit Talkin’ ‘Bout Your Generation.

McKenna left the program and was replaced with Ossie Ostrich, a puppet operated by Ernie Carroll, a writer and performer on some of GTV9’s earlier children’s and variety shows.

The HHIS team then later included radio announcer John Blackman as the show’s rarely-seen booth announcer who would provide voices for some of the show’s famous characters including Charlie Who, the Angel, Mrs MacGillicuddy and Fred Fly. 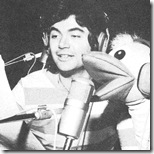 The popularity of the show triggered a couple of album releases – Hey Hey It’s Daryl And Ossie and Keep Smiling With Daryl And Ossie – and the phasing out of the cartoon segments in the show, focusing more on live studio segments.

HHIS appeared to be over after 1977 when the team moved across to the rival 0-10 Network to present a prime-time game show, The Daryl And Ossie Show, in 1978.  The game show lasted eight weeks and HHIS was re-instated at Nine early in 1979 with a new addition to the team, children’s TV presenter Jacki MacDonald who had been hosting Nine’s replacement Saturday morning show in the meantime. 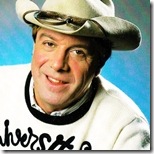 In June 1985 the show moved to the earlier timeslot of 6.30pm and had removed the ‘Night’ from the show’s title.  HHIS continued to add new team members, including Wilbur Wilde, Red Symons, Ian ‘Molly’ Meldrum (pictured) and others including Shane Bourne, Maurie Fields and cartoonist Andrew Fyfe.  Dominating the two-hour early-evening block on a Saturday night it became difficult for other networks to rival its popularity.

Just months after winning the TV Week Logie for Most Popular Light Entertainment Program, HHIS was cancelled late in 1999.  The Nine Network, and later Seven, would continue to show clip packages of some of the show’s most requested or most remembered segments, including many acts that performed in the show’s mock talent quest segment, Red Faces.

The return of HHIS, even in a ‘reunion’ form, appears to be an attempt by Nine to revamp one of its most popular entertainment brands of the ‘80s and ‘90s, a time when the network was the undisputed top-rating network, as its prime-time schedule is now struggling to keep up with the Seven Network and occasionally Network Ten.

Permanent link to this article: https://televisionau.com/2009/07/hey-hey-ready-for-revival.html