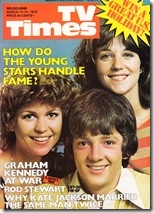 Instant stardom, and how they handle it
With TV soap operas turning young, unknown actors into national celebrities overnight, it is easy for these young stars to let their newfound fame get to their head.   But some of these young actors – including The Restless Years‘ Victoria Nicolls, Julieanne Newbould and Michael Smith (pictured) – do manage to get through the heady period of stardom to emerge as proven talents.  Nicolls acknowledged the support and guidance of experienced performers such as colleague June Salter: “If you ask her something, she’s so helpful.  She made me aware of camera techniques.  Helped with scenes, comedy – she has such wonderful comic timing.”  Even though she grew up in showbusiness, Newbould still found the sudden overnight fame to be a shock: “For five years I’d done things like Matlock Police and Division Four.  People would say ‘Oh, I saw you on TV last night,’ but nothing like this.  People come up and cuddle me.  Big Italian mamas pinch my cheeks.  Some want you to come home and marry their sons.”  Smith said that family and friends helped keep him down to earth: “They’d say ‘Aw, shut up, we don’t want to hear about The Restless Years anymore!’  Smith has also had the discipline of learning music from his mother, a piano teacher, and studying acting at Sydney’s Ensemble Theatre under Hayes Gordon.  Producer of The Restless Years, Don Battye, said with established actors on the series such as June Salter, John Hamblin and Noel Trevarthen, they do offer help to the younger stars but, “of course with some kids you can’t give them advice.  The only way they’re going to learn is to get into trouble and learn from experience.” 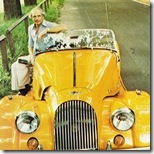 On your Marque!
Peter Wherrett‘s documentary series, Marque: 100 Years Of Motoring, has taken over eighteen months and visits to eight countries to complete.  The new series, beginning this week on ABC, looks at the development of the motor car as well as the industry’s future.  “I’m quite confident that cars as we know them will be around until well into the next century,” Wherrett (pictured) told TV Times.  “The industry is already planning the cars we will be driving then.” 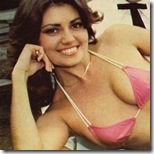 Nude pin-up star on Hogan show
Former Miss World finalist and magazine centrefold Karen Pini (pictured) is one of the girls chosen for the first Paul Hogan show for 1979.  Pini, who is also soon to appear in The Young Doctors, is a replacement for Delvene Delaney who has left the show as she and husband, producer John Cornell, are expecting their first baby.

It doesn’t ‘ad’ up for Johnny
Johnny Farnham isn’t too happy that he keeps hearing what sounds like himself doing commercials that he doesn’t remember doing.  Farnham’s producer Danny Finley said: “The situation is very embarrassing.  We have done a commercial for a bank.  We tried to make it very selective by doing only one.  Now we start hearing other commercials which sound like John and I suppose they sound that way to other people.”  When asked if he thought the situation might be deliberate, Finley replied: “It is some coincidence!”

Briefly…
Mike McCarthy, host of ATV0‘s Early Bird Show, and his wife Caroline have just welcomed the arrival of twins, Ryan and Bridie.  The couple already have three other children, twins Damien and Emily, 8, and Benjamin, 6.

Production has started on a new ABC drama series, based on Kylie Tennant‘s novel, Ride On Stranger.  The series features Liddy Clark, Warwick Sims (Against The Wind), Michael Aitkens (The Truckies) and Noni Hazelhurst (The Sullivans).

British actor Harry Corbett is to star in the new ABC children’s series Earth Patrol.  The new series, being produced as part of the International Year Of The Child, will also star actor Gus Mercurio.  Meanwhile, producers are on the hunt for a 16 to 18-year-old boy to feature in the series.  Already cast in the series are 11-year-old twins Gayle and Gillian Blakeney and Darren Ormsby, 12.

Viewpoint: Letters to the Editor
“All you people harping on the recent preponderance of sport on our TV – has it ever occurred to you that you don’t have to watch it?  Can’t you make your own entertainment?  Go for a walk instead of sitting passively in front of a TV set and waiting to be entertained.”  M. Ryan, NSW.

“Three cheers for TEN10 Sydney for the new mini-series they have just screened on Friday nights.  I am talking about Sugartime, produced in the US and starring Barbi Benton and Didi Carr.  It is a refreshing change from the glamour drivel of Charlie’s Angels, where all the pretty faces can do is hurtle 16-stone gangsters across rooms and run down Lincoln Continentals with nothing but their tricycles.”  D. Ehrlich, NSW.

“Come on all you sports lovers, get up on your hind legs and be counted, otherwise the vocal minority may succeed by catching TV channel policymakers’ ears and curtailing some of our precious sports telecasts.”  A. Hartwig, QLD.

What’s On (March 10-16):
Saturday afternoon sport includes Australia versus Pakistan in First Test cricket on ABC, live from Melbourne.  HSV7 has the Moomba Masters International Waterski Tournament from the Yarra River.  ATV0 goes to the races at Flemington with Newmarket Stakes Day, hosted by Michael Schildberger and racecaller Clem Dimsey.

Sunday afternoon on HSV7 includes a one-hour live telecast of Music For The People from the Myer Music Bowl in Melbourne.  Hosted by Dan Webb, the telecast includes the Australian Symphony Orchestra conducted by Hector Crawford. 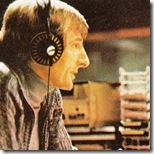 ABC starts its new 7.30pm line-up this week with new series of Are You Being Served? and George And Mildred, magazine program Holiday With Bill Peach, documentary series Marque: 100 Years Of Motoring, and on Friday night, The Two Ronnies.  ABC also launches new drama at 8.30pm with The Oracle on Monday night, starring John Gregg (pictured), Pamela Gibbons, Julie Hamilton and Danny Adcock, and Golden Soak on Tuesday, with Ray Barrett, Ruth Cracknell and Bill Hunter.