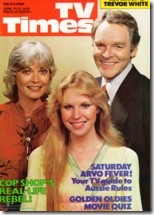 Cover: Cop Shop’s real-life rebel
In playing troubled teenager Gayle Taylor in the Seven Network series Cop Shop, actress Jo-Anne Moore (pictured, with co-stars Rowena Wallace and George Mallaby) can see similarities between that of her character and her own teen years. “I had a period when I was very rebellious. If I saw something I wanted to do, I did it. Not getting into trouble really, just wanting to get out to see what life was about. I used to get into a lot of arguments with my parents then, but we are good friends now,” she told TV Times. The Cop Shop role is the 19-year-old’s first major TV role following guest appearances in Bluey, The Sullivans, Homicide and Bellbird, and the movie The Getting Of Wisdom. 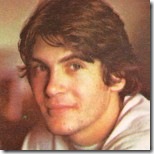 The Years fly south
In an attempt to boost The Restless Years‘ profile in Melbourne, the normally Sydney-based soap spent two days’ location filming in Melbourne. Filming had taken place mostly at the Sidney Myer Music Bowl and the Shrine Of Remembrance. June Salter, who plays schoolmistress Miss MacKenzie, enjoyed the trip to the southern capital: “It’s a lovely city, perfect for outside shots. The weather was quite amazing for the two days we spent here.” Joining Salter for the Melbourne-based plot were co-stars Zoe Bertram and Sonny Blake (pictured). 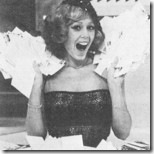 To Sidney with love!
Ann Sidney (pictured) had plenty of admirers when she was Miss World. Now the co-host of Perth STW9‘s The Better Sex is once again being inundated with letters. More than 15,000 entries have been received at STW9 for a competition being run by the game show, offering daily prizes such as a hairdryer or a radio, and the major prize of a trip to Singapore or Hong Kong. The Grundy-produced game show, hosted by Mike Preston, has also just received news that it has been sold for screening interstate.

Discomania is coming!
The growing disco phenomenon, inspired by the movie Saturday Night Fever, has seen plans for a weekly series Disco Connexion, promising as many as 200 enthusiastic amateurs in choreographed disco routines. A pilot episode for the program, featuring Sydney disco personality Angelo “Angie” Naxam, has already been taped and subsequent episodes are planned to have live via-satellite crosses to major overseas venues such as Studio 54 in the US. The program is being developed by McCabe Paradine Productions for the 0-10 Network.

Viewpoint: Letters to the Editor:
“I have endured the ever-declining standard of Countdown until I have come to the stage I can take no more. Ian Meldrum is so juvenile I am embarrassed to have him remain as compere of Countdown. The only reason I still watch the program is because it is the only pop program on at a decent time.” A. Rankins, TAS.

“All the yakking about which country produces the best comedy shows is quite unnecessary. Everyone knows that no other country in the world can outclass the British for comedy.” E. Williams, QLD.

“The 0-10 Network must be proud of Young Talent Time and The Restless Years – I don’t like to be out in case I miss any part of them. Same goes for Nine‘s The Sullivans, The Young Doctors and Little House On The Prairie.” R. White, NSW.

What’s On (June 17-23):
On Monday, Exploring The Psychic Mind, a 90-minute special, airs on ATV0, hosted by John Laws with Carol Raye and Patrick Tennyson.

The following night, HSV7 presents Everything You Always Wanted To Know About The Law… But Couldn’t Afford To Ask, hosted by David Johnston and news reporter Pamela Graham. The 90-minute special covers the type of legal matters that affect everyday Australians – neighbourhood disputes, trespassing and road accidents are among the subjects re-enacted and discussed.

Comedienne and actress Gloria Dawn is the subject of the second episode of ABC‘s Woman In Question, in a program taped just before her death.

This week’s guests on The Peter Couchman Show include Maria Venuti, Julie McKenna and Wendy Stapleton.

Sunday night movies are Killer Force (HSV7), Nobody Is Back … Prepare Your Grave (GTV9) and Billy Two Hats (ATV0).