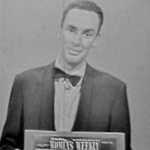 END_OF_DOCUMENT_TOKEN_TO_BE_REPLACED

Sale stars in sitcomSale Of The Century’s Glenn Ridge and Jo Bailey are soon to be seen as guest stars in the Nine Network sitcom All Together Now. In the episode to screen this week, Anna (Jane Hall, pictured with Bailey) wins a spot on the popular quiz show. But Bailey is playing down her …

END_OF_DOCUMENT_TOKEN_TO_BE_REPLACED

‘Don’t call me Betty!’ While Hey Dad! star Julie McGregor (pictured, centre, with co-star Rachael Beck) loves playing the role of ditzy secretary Betty Wilson in the long-running sitcom (“I’m not sure that there is anything around that would be as rewarding to do,” she says) don’t ask her to “do a Betty” when she’s …