Cover: Nicolle Dickson (Home And Away) and husband James Bell. Packing a punch!SBS has assembled some of Australia’s top writing, directing and acting talent for its upcoming drama series Six Pack.  The series of six self-contained stories is the first local drama production to come from the network since the 1987 mini-series Always Afternoon.  Included …

END_OF_DOCUMENT_TOKEN_TO_BE_REPLACED 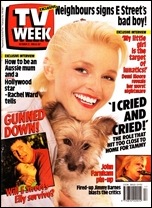