When female newsreaders were “the good news” 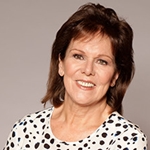 The novelty of ABC‘s first female TV newsreader 40 years ago showed that attitudes to women on television were very different to now.

“Australia’s newest sex symbol is not a naughty nurse from The Young Doctors. She’s not even a titillating teacher from Glenview High, or a passionate policewoman from Cop Shop. Believe it or not, she’s an ABC newsreader” — so declared Melbourne’s Scene newspaper in April 1978. Female newsreaders or journalists on television were still a rarity even by the late 1970s, although there had been some trailblazer reporters including Tanya Halesworth, Mickie de Stoop, Anne Deveson, Kate Ballieu and Brisbane newsreader Melody Iliffe.

Throsby, however, wasn’t falling for the sexist adoration and denied that sex appeal had anything to with her TV role. “If that’s the only reason they picked me for the job I’ll quit straight away,” she told Scene. “There are lots of women doctors and lawyers around now — did they get where they are because they looked sexy?”

Throsby was no newcomer to the media. She had been an announcer at ABC radio since the 1960s, including as one of its first female newsreaders since World War II. After Throsby began reading TV news for ABC, the commercial sector showed a greater interest in employing female newsreaders.

Since the sensationalist media attention of 40 years ago, Throsby continued an esteemed career at ABC, including hosting long-running programs for radio 2BL (now ABC Radio Sydney) and ABC Classic FM, the latter for which she still presents concert events, and acts as a mentor to ABC’s next generation of broadcasters. She has also worked as a presenter for SBS and was a panellist on Beauty And The Beast for the Ten Network in the 1980s.

Permanent link to this article: https://televisionau.com/2018/04/when-female-newsreaders-were-the-good-news.html