Daniel’s lonely road to stardom
When you’re Home And Away‘s latest heart-throb it can be easy to let your ego get ahead of you, but 15-year-old Daniel Amalm (pictured with co-star Laura Vasquez), who plays Jack, is playing it cool. “If you are not careful you can let it go to your head,” he told TV Week. “That wouldn’t be a good thing because once you start believing you’ve hit the big time, it affects your work. The fact is, I realise I’m an extremely lucky boy to have this job, and I’m treating it as a wonderful learning experience.” Amalm, who left his friends and family behind in Brisbane when he moved to stay with a family in Sydney for Home And Away, is also finding stardom a bit of a lonely experience. “The thing with this show is everyone is 18 or older, so it’s hard to make good mates. They aren’t wanting to go to the movies, they’re more into nightclubs or pubs, and I can’t go there. I’m still a kid really, although I can’t act like one around here because I’m in a working world.” He laughs at rumours that the producers of the US hit series Baywatch are interested in him. “It’s a nice idea. I don’t know where it’s come from, but it would be great.”

Digging up Uncle Arthur!
Four years after the demise of The Comedy Company, comedian Glenn Robbins is still finding there is demand for his comic creation, Uncle Arthur. Although Robbins has resisted the temptation to bring back the character, he is considering a proposal to revive Uncle Arthur in an unlikely pairing with Nine‘s Burke’s Backyard. “I never walked away from the character saying I’d never do him again,” Robbins told TV Week. “I have been approached to do regular work as Uncle Arthur on Burke’s Backyard. Don (Burke) suggested it would be a lot of fun to have the character in his show, but I explained to him that I’ve got Jimeoin to work on and that we’d talk later.” As well as working on Jimeon, Robbins is also filming a pilot for a new comedy show for Seven later in the year. 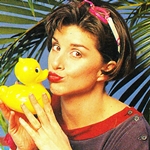 Monica has a dip at prime time
Singer Monica Trapaga (pictured), currently a favourite with Play School‘s young viewers, is making the change to prime time to talk to a more grown up audience. In the 13-part series Living In The Nineties, Trapaga is host and reporter as the show tackles the issues facing the decade, whether it be financial, sexual, social, corporate or domestic. “Play School‘s very regimented, although it changes every day and you’re doing different scripts. Hosting a prime-time magazine style show, there’s none of the props. You’re stripped of your costume and stripped of your partner and your toys,” she told TV Week. “But I’m not there to be the voice of knowledge or the experienced social guru. I’m just there to present a point of view. I think that’s my only conflict with Living In The Nineties. I’m supposed to be a serious kind of anchorwoman, and that’s a bit difficult because I’m not a particularly serious person.”

“Janus is far more than just a Phoenix sequel. Janus has its population of coppers and crims, but now they’re joined by silks and beaks, barristers, instructors and tipstaff. All are part of a landscape on which a year of prosecutions against a notorious criminal family, the Hennesseys, takes places simultaneously with a shake-up of the system itself. The description “courtroom drama” sells Janus short. The series moves from the seedy to the successful, from Hennessey haunts to barristers’ backrooms. And it looks at broader issues such as the prohibitive cost of legal proceedings. The early episodes of Janus see some stand-out performances from Chris Haywood, as the chain-smoking, maverick defence barrister Michael Kidd, Louise Siversen as magistrate Glenda de Bono, Leverne McDonnell as undercover policewoman Jan Murray and Paulene Terry-Beitz as the Hennessey family matriarch, Shirl. I was astounded to learn that Janus is Terry-Beitz’s first time in front of the television cameras.”

Monday: The men’s wheelchair marathon and closing ceremony mark the end of the Commonwealth Games (6am, Ten), with evening highlights (7.30pm, Ten). Children’s series Ocean Girl (4.30pm, Ten) makes its debut. In Neighbours (6.30pm, Ten), the Willis family is concerned about Pam’s (Sue Jones) hasty decision to resign from her job. In Home And Away (7pm, Seven), Shane (Dieter Brummer) learns that fatherhood isn’t as easy as he thought it would be.

Tuesday: In Home And Away (7pm, Seven), Angel (Melissa George) resolves to find her younger sister. The one-hour special Hey Hey By Request (8pm, Nine) takes a look at some of Hey Hey It’s Saturday‘s favourite moments and includes a special appearance by former co-host Jacki MacDonald. In GP (8.30pm, ABC), Tessa (Marilynne Paspaley) is involved in a sexual harassment charge when her colleague, Jessica (Lenita Vangellis) reveals her distress at the attention she is receiving from her boss, a highly respected surgeon. Ten begins its post-Commonwealth Games revamp with debuts for US series Mad About You (8pm) and Models Inc (8.30pm) — the latter starring Cameron Daddo.

Wednesday: In Heartbreak High (7.30pm, Ten), Danielle (Emma Roche) gets into trouble when she decides to try modelling, and Con’s (Salvatore Coco) relationship with Greta (Andrea Moor) is a little strained.

Thursday: The new magazine series Living In The Nineties (8pm, ABC) looks at contemporary social issues such as redefining the family, workplace security, gender wars and parenting. In the series debut of Janus (8.30pm, ABC), a city reels in shock as members of one of the country’s most notorious criminal families walk free, acquitted of shooting two young policemen — one fatally.

Friday: In Home And Away (7pm, Seven), Tug (Tristan Bancks) makes an important decision about his future. In Rex Hunt’s The Great Outdoors (7.30pm, Seven), Bridget Adams explores the Bungle Bungles and demonstrates an easy-to-assemble bed perfect for sleeping outdoors; and guest reporter Andrew Daddo rides his motorbike to Bateman’s Bay through Old Mogo Town to an overnight stay at Narooma. Friday AFL includes delayed coverage of Collingwood versus Hawthorn (9.30pm, Seven) at the MCG.