Seven figures… it’s a Sweet deal!
Police Rescue star Gary Sweet is tipped to sign an exclusive $1 million contract with the Seven Network. This follows Seven’s recent signing of Andrew Denton from ABC for a significant sum. The deal between Sweet, producers Southern Star Xanadu and Seven is expected to lead to several telemovie projects. “Nothing has been signed. No comment,” is all a spokesperson from Southern Star Xanadu was prepared to say. If the deal goes ahead it puts into jeopardy plans for a fourth series of Police Rescue, a popular drama for ABC. Regardless of the contract Sweet will already be appearing on Seven in the year ahead in the mini-series The Battlers which has finished production. 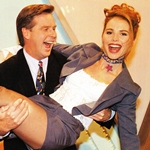 A-J kicks on!
Former E Street star Alyssa-Jane Cook, who recently starred in the Singapore production of The Rocky Horror Show, is now in the Sydney theatre production A Bedfull Of Foreigners and this week appears on screen as guest co-host on Sale Of The Century. Although many actors would turn down an offer such as Sale Of The Century, Cook (pictured with host Glenn Ridge) took it on with no concerns. “I think some people are a little bit precious about these things,” she told TV Week. “Sure, I thought carefully about doing this, but a lot of people have supported me in the past and it’s a way of showing them that I’m still around. And doing Sale is not an easy job. I was quite nervous. There’s a lot of pressure to get it right, because you’re doing a whole week of shows in one day.” 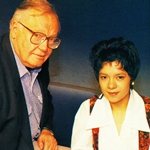 The changing voice of youth
Veteran actor Charles ‘Bud’ Tingwell has taken on a new role — as voice coach for 21-year-old Samantha Butler, the host of ABC‘s youth affairs program Attitude. “If you looked at tapes of the first series of the show, you can definitely notice that Bud has helped me a lot this series. I think my voice is a lot better now,” she told TV Week. “I’m trying to be more conversational, which I knew I should be, but I didn’t know how to achieve that.” Although Tingwell is not a trained voice coach, he has a number of willing students. “I have one government minister and one very well-known radio chap who went over to the telly, both nameless, and I’ve been helping them,” he said. “I don’t know how they got on to me, except that I’ve been around a long time.” Tingwell is still being kept busy in the production side of television. He recently directed five episodes of sitcom Newlyweds and will appear in the upcoming final episode of A Country Practice. 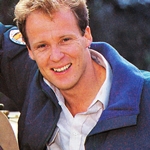 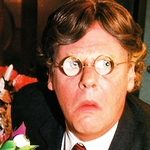 “There’s big — and very good — news on the kids’ TV front, with the Australian Children’s Television Foundation announcing a definite start to a second series of the excellent Lift Off. The writing of another 26 episodes has started, with pre-production scheduled for January and filming for April, 1994. In the meantime, Mark Mitchell, in his character Mr Fish (pictured), will host a Lift Off game show, to be produced by the Children’s Television Foundation and the ABC, starting next month.”

Monday: The $6.5 million children’s series Ship To Shore debuts (4.30pm, Nine). In A Country Practice (7.30pm, Seven), Ian McIntyre (Paul Gleeson), the new park ranger, takes pity on a sick woman and her children and allows them to live in his farmhouse. On the eve of the Melbourne Cup, Healthy Wealthy And Wise (7.30pm, Ten) features an interview with jockey Peter Bakos, a veteran of four Melbourne Cups.

Wednesday: In Home And Away (7pm, Seven), Angel (Melissa George) is worried to discover that Shane’s (Dieter Brummer) masculinity crisis is far from over. In Newlyweds (8pm, Seven), Irene (Sandy Gore) comes to Allie (Annie Jones) in a panic about her relationship with Eric (Ross Williams). Michelle Tuahine and Wayne Coolwell host the Aboriginal Sports Awards (11.05pm, ABC) from the Southern Cross Hotel, Melbourne.

Thursday: The Melbourne Cup Carnival continues with Crown Casino Oaks Day (11am, Ten), hosted by TIm Webster. In Neighbours (6.30pm, Ten), Debbie (Marnie Reece-Wilmore) is under pressure from Craig’s (Daniel Tobias) mother (Jennifer Jarman-Walker) to reconsider a relationship with him.

Friday: In Home And Away (7pm, Seven), Angel (Melissa George) is in danger when a thug breaks into the house; while Sarah (Laura Vazquez) and Nathan (David Dixon) look like becoming a hot item. ABC presents live coverage of the Australian Film Institute Awards (8.30pm), live from the Wesley Centre, Sydney. Nominations for Best Film are The Piano, Map Of The Human Heart, The Heartbreak Kid and On My Own. The Piano, starring Holly Hunter, Harvey Keitel, Sam Neill and Anna Paquin, has 13 nominations all up. Ken Sutcliffe hosts one hour of highlights from the Australian Grand Prix in Adelaide (11.15pm, Nine).