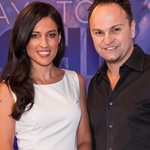 With 100 days to go until the XXII Olympic Winter Games from Sochi, Russia, the Ten Network has announced details of what it promises is the biggest free-to-air coverage ever in Australia of a Winter Olympics.

The network is promising more than 550 hours of coverage across both channels Ten and One — including 360 hours of live coverage.

Ten’s nightly coverage will be headed by Sochi Tonight, hosted by Stephen Quartermain and Winter Olympic gold medalist Alisa Camplin OAM, screening at 6.00pm. Sochi Live, hosted by Mel McLaughlin (pictured) at Olympic Park in Sochi and Stephen Quartermain and Alisa Camplin in Melbourne, will provide live coverage throughout the evening. Brad McEwen takes over hosting Sochi Live overnight through to 5.30am.

One will broadcast Winter Olympics coverage 24 hours a day during competition. From 6.00pm to 6.00am Greg Rust and Nicole Livingstone will host live coverage of events, while during the daytime hours One will present competition highlights.

Ten’s news and current affairs portfolio, including Ten Eyewitness News, Wake Up and The Project will also incorporate Games coverage with their own reporters and presenters onsite at Sochi.

“Sochi will play host to the most spectacular Olympic Winter Games the world has ever seen and Network Ten is delighted to bring all the action to Australians, for free.

“The XXII Olympic Winter Games will be one of the broadcasting events of 2014 and we will present it to Australians across several media platforms. The combination of Ten, One and Ten Play will ensure our coverage of this global sporting event is comprehensive, compelling and engaging.” Permanent link to this article: https://televisionau.com/2013/10/ten-unveils-winter-olympics-coverage.html