Seven and Prime renew their partnership

Ten to launch Wake Up and Studio 10 on 4 November Tears as the curtain falls
“Cut… that’s a wrap!” — and with those words, spoken by producer James Davern, production of A Country Practice came to an end after 1058 episodes. Jamie Croft, the show’s youngest cast member (pictured right with Kym Wilson), delivered the final line in the final scene as cast and crew gathered to farewell the 12-year-old drama. The last scene features the show’s entire cast plus returning cast members Penny Cook and Joan Sydney. “The emotion you’ll see in the final scene is very real. This is a very powerful way to end,” a Seven spokesperson told TV Week. Former cast members Anne Tenney, Shane Withington, Grant Dodwell, Matt Day and Georgie Parker joined in on the wrap-up party. Penny Cook, who left ACP in 1985, was keen to be there for the last episode. “I would have been devastated if I hadn’t been asked to come back for the last ep,” she told TV Week. “I wanted to do it even before they asked me. It was very much an actor, crew and people show. I am so lucky to have had that involvement with something that I think is incredibly wonderful, correct and genuinely nice.” 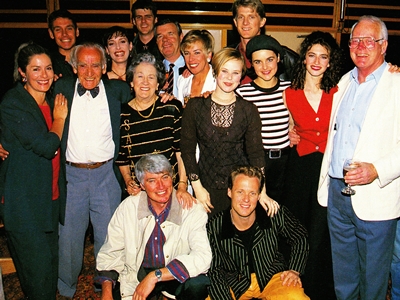 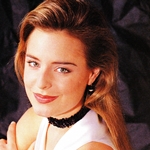 Bye Dad!
Hey Dad! star Rachael Beck (pictured) has quit the long-running sitcom and is going on to a lead role in the stage production of Me And My Girl. She will be taping her last scenes for Hey Dad! later this month. “It’s time to move on and time to have more experiences in my career and in my life,” she told TV Week. “I’ve achieved what I can in a sitcom and I know how that works now. I’ve had the most wonderful three years of my life, not only professionally, but in meeting the people I’ve worked with.”

A dog’s life for Matt
Former A Country Practice star Matt Day has been confirmed for the cast of Nine‘s new sitcom The Bob Morrison Show. The 13-part series takes a look at a suburban Australian family through the eyes of their dog — Bob Morrison. Day will play the part of apprentice plumber Jake Duffy. Former The Sullivans and Prisoner star Andy Anderson has also signed up for the series, playing the part of Steve Morrison, Jake’s boss. 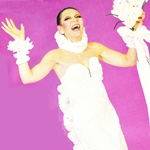 Jeanne’s a Glad Bag lady
Twelve years after Jeanne Little (pictured) created her first frock made from garbage bags, the fashion fad has been reborn with the inaugural Glad Bag fashion awards, presented on Midday With Ray Martin. More than 10,000 entries were submitted to the contest, with the winning entry judged by fashion experts Jill Fitzsimon and Edward Bock and entertainer Noeline Brown. “Truly and honestly, the clothes were so wonderful you could easily be married in them,” Little said enthusiastically. “I wouldn’t be ashamed to wear any of them at all.”

“Still strangely hidden away by Channel 9 at 10.30pm on Thursday, the US sitcom Seinfeld is no longer just a raging success in its market, but a growth industry. Jerry Seinfeld‘s book, Sein Language, is a best-seller and now Americans can buy The Seinfeld Companion. Subtitled Atomic Wedgies To Zipper Jobs: An Unofficial Guide To TV’s Funniest Show, it comes from Entertainment Weekly writer Bruce Fretts and is a glossary of Seinfeld terms, profiles of the characters and a rundown of the 60-plus episodes now in the can.”

Program Highlights (Melbourne, October 16-22):
Saturday: Ten’s documentary of the week, Crocodile Hunter: Journey Down The Burdekin (6.30pm) follows Steve and Terri Irwin as they set out on a rubber raft down an inaccessible stretch of river, searching for evidence of crocodiles.

Monday: In A Country Practice (7.30pm, Seven), Rosemary’s (Maureen Edwards) son Robert (Andrew McDonell) returns to Wandin Valley with his new wife (Elise McCredie) who is unaware that her husband suffers from schizophrenia.

Tuesday: Afternoon talk show Live It Up (3.30pm, Ten) covers the topic of Post Natal Depression. In A Country Practice (7.30pm, Seven), Rosemary’s (Maureen Edwards) daughter-in-law (Elise McCredie) threatens to leave her husband (Andrew McDonell), claiming she can’t cope with his schizophrenia. In GP (8.30pm, ABC), Ian (Tony Llewellyn-Jones) is called in to counsel a family after the suicide of their eldest son.

Thursday: In Snowy (8.30pm, Nine), Lilian (Rebecca Gibney) urges Michael (Bernard Curry) to make peace with Wolfie (Jochen Horst), but Wolfie has disappeared amid speculation that he has taken his own life.

Friday: In Neighbours (6.30pm, Ten), Beth (Natalie Imbruglia) decides to give a relationship with Wayne (Jonathon Lee) a chance; while Helen (Anne Haddy) fears her driving days are over. In The Great Outdoors (7.30pm, Seven), Family Feud host Robert Brough takes Frankie J Holden on a tour of his favourite places on the Sunshine Coast; while Ernie Dingo visits Broome in Western Australia; and Rex Hunt checks out tidal rock pools.