Hey, Dad wanted!
After seven years and more than 250 episodes, Robert Hughes is leaving Hey Dad!, but producers are looking to re-cast for a new dad for the next series to go into production.  Hughes’ departure from the show leaves Julie McGregor as the show’s only remaining original cast member.

Ramsay streak!
Former Neighbours star Felice Arena has spoken to TV Week about baring all on stage in the new London production of Hair. “We only strip for 15 seconds, but it seems like a lifetime,” he said. “It wasn’t really so bad once we all did it together. Some of the girls were very nervous, but we all knew from the start we would have to strip sometime.” 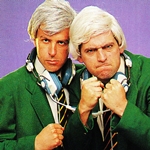 Fun and Games
It is a busy time for Australian sport — with the AFL and NSWRL Grand Finals, plus the announcement of the host city for the 2000 Olympic Games.  The Late Show‘s sporting experts Graham (Rob Sitch) and the Colonel (Santo Cilauro) are confident that Sydney’s bid for the 2000 Games will be successful. “Surely they’re not considering Berlin,” says Graham. “You only have to watch Allo Allo for five minutes to realise what the Germans are like”.  And the Colonel isn’t taking Manchester’s bid too seriously, either. “Anyone who thinks Manchester has a chance obviously has not been there,” he said. “It’s like those bids for pay TV — it’s a dummy bid.”  The Colonel has also taken into account Sydney’s appeal to the tourist market: “Just imagine a tour of Noelene and Laurie Donaher‘s house — especially if the Olympic Games has the rowing at Sylvania Waters.” 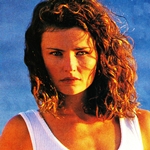 “Only in Northern Exposure would the episode, in which the consummation of the love-hate relationship between the two main characters finally occurs, start with her breaking his nose. But, this being the delightfully oddball series it is, you tend to expect the unexpected and almost wait for her to break it again… and she does!”

Tuesday: Sitcom My Two Wives returns with a new series (8pm, Nine). In GP (8.30pm, ABC), Tessa (Marilynne Paspaley) learns more about her Greek background when Zoe (Janelle Owen) decides to make a film of her great uncle Costa (Alexis Anthopoulos) at the nursing home where he lives. 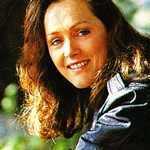 Wednesday: In Paradise Beach (5pm, Nine), Roy (John Holding) bumps into an attractive older woman, Paula (Zoe Bertram, pictured), three times in one day and they find they have several common interests. In Neighbours (6.30pm, Ten), just to prove that they are no longer a couple, Brad (Scott Michaelson) and Beth (Natalie Imbruglia) arrange for Beth to go on a date with Wayne (Jonathon Lee) — but Brad may not be as keen on the idea as he makes out. World Series Debating (8.30pm, ABC) discusses the topic That Football Is Stupid — featuring Wendy Harmer, Lex Marinos, Andrew Denton, HG Nelson and moderator Campbell McComas. Sigrid Thornton stars in the telemovie The Feds (8.30pm, Nine) — filmed on location in Hong Kong, Canberra and around Victoria.

Thursday: Seven, Nine and Ten all provide coverage of the announcement in Monte Carlo of the host city of the 2000 Olympic Games. Bidding for the rights are Beijing, Berlin, Istanbul, Manchester and Sydney. Seven’s coverage starts at 10.30pm with a repeat of the special Share The Spirit (10.30pm), hosted by Ann Sanders, followed by a repeat of the Opening Ceremony of the 1992 Olympic Games in Barcelona (11.30pm). Nine’s coverage starts at 7.30pm with the one-hour special Olympic Decision: Australia 2000, hosted by Steve Liebmann and Elizabeth Hayes.  Sports Tonight (11pm, Ten) presents a special Olympic announcement edition, followed by a screening of the film Chariots Of Fire (12am). With the actual announcement due at 4.20am (AEST), Seven and Nine present a rare joint telecast hosted by Bruce McAvaney and Ray Martin which is also made available to other networks.  Seven and Nine continue coverage through to 9am.